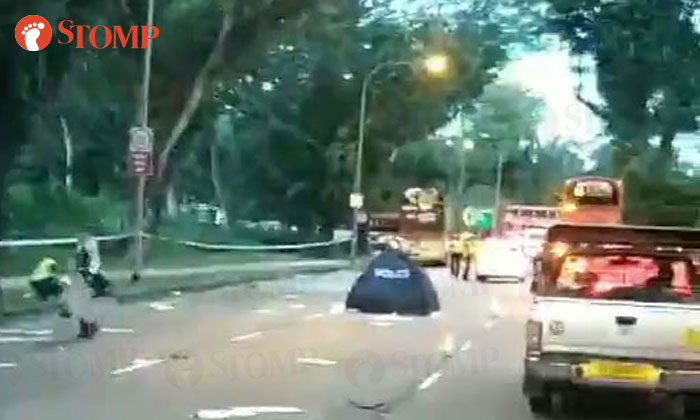 A 70-year-old motorcyclist died after he was involved in an accident with a bus and lorry along Ang Mo Kio Avenue 1 towards Upper Thomson Road on Thursday morning (Feb 21).

The bus driver, a 46-year-old man, was arrested for causing death by negligent act, the police said.

Stomp understands that the bus involved was a public bus.

Stomper Asim alerted Stomp to the incident and shared a video taken at the scene.

In the video, a motorcycle is lying on the side of the road while several pieces of newspaper are strewn all over the area.

A trail of blood is seen on the road leading to a blue death tent erected in the second lane.

In response to a Stomp media query, the police said they were alerted to the accident involving a bus, a lorry and a motorcycle at about 6am.

The motorcyclist, a 70-year-old man, was pronounced dead by paramedics at the scene, a spokesman said.

The police are appealing for witnesses to come forward to assist with ongoing investigations.