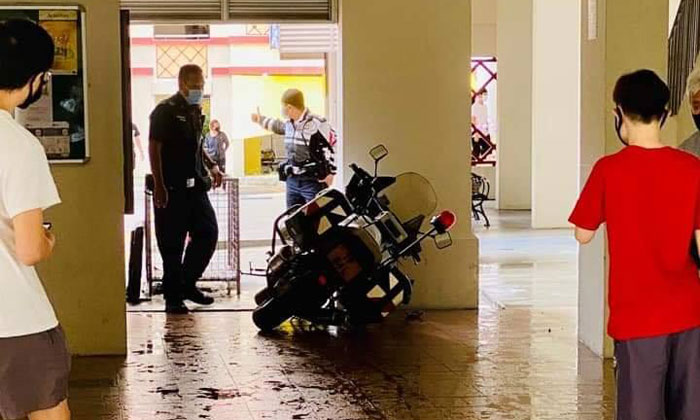 A 21-year-old male motorcyclist and his 18-year-old male pillion rider have been arrested for dangerous riding and perverting the course of justice.

The police said in a statement that the motorcyclist and his pillion rider refused to obey a Traffic Police (TP) officer's instruction to pull over to the side of the road while travelling along Tampines Expressway (TPE) on Wednesday (May 27) at about 4.20pm.

Instead, the motorcyclist sped off with the TP officer in pursuit for over five kilometres.

The motorcyclist then went on to commit several serious traffic violations, including failing to conform to a red light signal and riding recklessly against the flow of traffic.

He also weaved dangerously between pillars at the void deck of a Housing Board (HDB) block at Ang Mo Kio Avenue 5 before the TP officer lost sight of the duo.

The TP mounted a manhunt operation to arrest the motorcyclist and his pillion rider.

Officers from the TP established their identities and arrested them within 11 hours.

The TP has also impounded the motorcycle.

Investigations reveal that the motorcyclist did not possess a valid driving licence.

Both men are also being investigating for breaching safe distancing measures under Covid-19 (Temporary Measures) Act.

In its statement, the TP said it takes a stern view on persons riding or driving a vehicle without a valid riding/driving licence, as such dangerous road behaviour puts the lives of other road users at risk.

"We will continue to take tough enforcement action against errant motorists who choose to flout traffic rules or to disregard the safety of other road users, including pedestrians and other vulnerable road users," it said.

Motorists convicted for dangerous riding shall be liable to a fine not exceeding $5,000 or to up to 12 months' jail, or both.

In the case of a second or subsequent conviction, a fine not exceeding S$10,000 or a jail term of up to two years, or both, can be imposed.

In addition, they may have their driving licence disqualified by the Courts.

Any person convicted for obstructing, preventing, perverting or defeating the course of justice, shall be liable to imprisonment for a term not exceeding seven years, or with fine, or both.