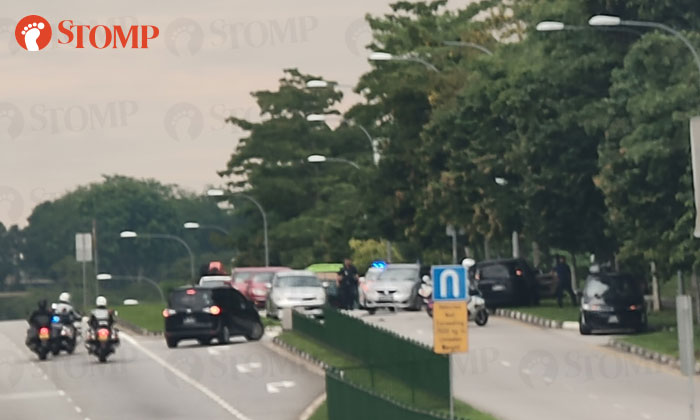 A 49-year-old man was arrested for suspected drug-related offences, driving without a valid licence and other traffic-related offences after a police chase from the Pan Island Expressway (PIE) to Old Choa Chu Kang Road on Tuesday afternoon (Apr 7).

Stomper Adi alerted Stomp to the incident and shared a video and photos of the driver being handcuffed.

"I was outside the Home Team Academy, waiting for my son to book out, when I saw around 10 Traffic Police and highway patrol vehicles zooming past and chasing after a black car.

"The black car ended up on the opposite side of the road after mounting the kerb and hitting a lamp post.

"The male driver was subsequently handcuffed by the police."

In response to a Stomp query, the police said they were performing patrol duties at about 4.26pm along the PIE towards the Kranji Expressway (KJE) when they decided to conduct a check on a driver of a car.

When the police signalled for the driver to stop his vehicle, he refused to comply with the officer's instruction to stop and sped off instead, a police spokesman said.

In the ensuing pursuit, the same car was involved in an accident along Old Choa Chu Kang Road towards Sungei Tengah Road.