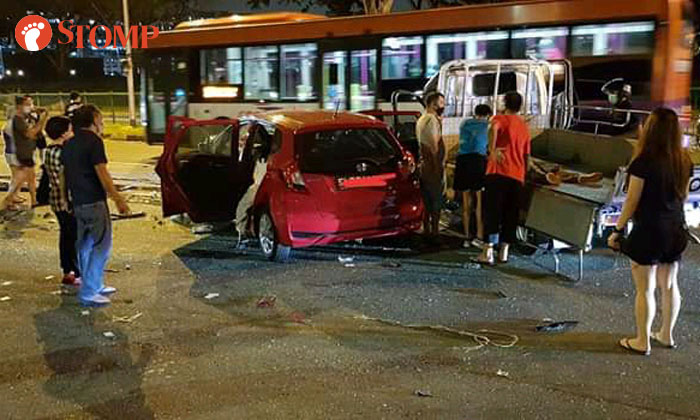 A 34-year-old man was arrested for dangerous driving and suspected drug-related offences after an accident involving three cars and a lorry occurred along Bedok North Road towards Tampines Avenue 10 on Tuesday evening (May 26).

Five people, including a two-year-old girl, were taken to hospital.

Several Stompers alerted Stomp to the incident and shared photos and videos of wrecked vehicles at the scene.

Debris is seen scattered on the road as the Singapore Civil Defence Force (SCDF) arrive at the scene.

Several passers-by are gathered around as well.

The moment of impact was caught in a video that was posted on Facebook.

In the footage, a red car is seen speeding towards a lorry travelling ahead in the left-most lane.

The car hits the rear-right of the lorry causing both vehicles to mount the pavement before sending the lorry careening and crashing through the central road divider railing and ending up on the opposite side of the road.

In response to a Stomp query, the police said they were alerted to the accident at about 8.53pm.

"Two passengers, a 31-year-old woman and a two-year-old girl, were conscious when conveyed to CGH and KK Women's and Children's Hospital respectively.

"A 34-year-old male driver was arrested for dangerous driving and suspected drug-related offences."