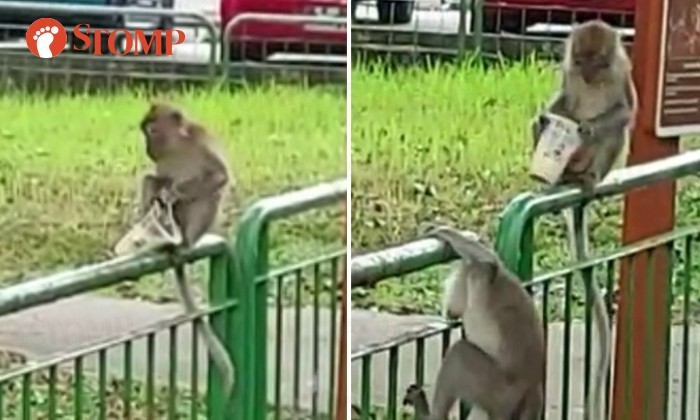 Gone are the days where people thought monkeys only loved bananas. Now, they are coming after our most beloved treat: bubble tea.

Stomper Song was completely taken aback when she saw a monkey snatch a Koi bubble tea from a woman's hand at a bus stop near MacRitchie Reservoir.

In the video, a monkey can be seen sitting on the railing, sticking its hand inside the Koi cup, and thoroughly enjoying the milk tea treat.

Another monkey then jumps onto the railing to join the feast, but was quickly turned away by its friend.

A third monkey can also be seen eating boba scraps that have fallen on the ground.

"I was at the bus stop and I saw this lady holding her Koi drink while waiting to board the bus," Song said.

"Out of nowhere, a group of four monkeys appeared and one monkey snatched the Koi plastic bag from her.

"The lady resisted, but the plastic bag broke and the monkey managed to take her milk tea."

Song added that she saw the monkey immediately hop onto the railings to enjoy the stolen treat.

"The poor lady was shocked after the incident, and other people at the bus stop started hiding their food and drinks in their bags," said Song.