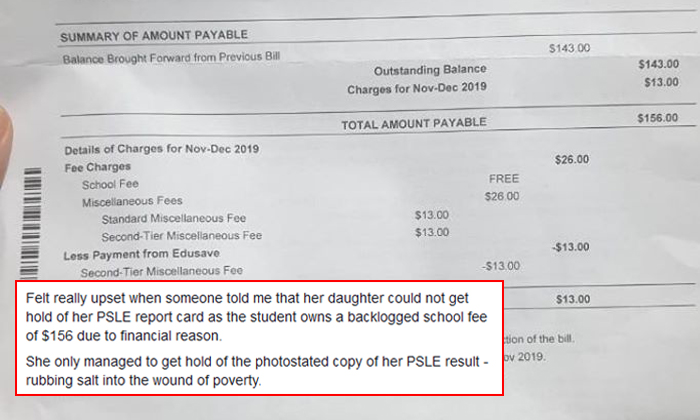 The Ministry of Education (MOE) has clarified a Facebook post alleging that a student's results slip was being withheld due to unpaid school fees.

In a Facebook post on Monday (Nov 25), Mr Gilbert Goh shared that an acquaintance's daughter was unable to get hold of her Primary School Leaving Examination (PSLE) results slip as the student owed "a backlogged school fee of $156 due to financial reason".

According to Mr Goh, the student only managed to receive a photocopy of the original results slip until a Good Samaritan helped to foot the bill.

Mr Goh, who is a 58-year-old career counsellor and activist, likened the matter to that of "rubbing salt into the wound of poverty".

His post, which has garnered more than 3,000 shares and 1,000 comments to date, was also reposted by ex-presidential candidate Tan Kin Lian.

When contacted by Stomp, Mr Goh said he is part of a community that ventures out to do charity work such as helping the poor and homeless.

He added: "We began doing this eight to nine years ago.

"I started by helping those who were jobless and divorced through the Transitioning – Unemployment Support Service (TUSS), which is a registered non-governmental Organisation (NGO)."

On his Facebook page, Mr Goh has also shared other similar cases of students who were unable to get their original results slip.

He told Stomp: "We have been alerted to several cases and would verify them with the invoice or children's particulars, before helping to pay the school fees.

"Donors would come forward to help pay off the owed sum."

Responding to queries by Stomp, the MOE said it is aware of the two Facebook posts by Mr Goh and Mr Tan.

A spokesman said: "The posts highlighted an incident where the original PSLE results slip was withheld from a student whose parents had incurred accumulated school miscellaneous fees of $156.

"The withholding of PSLE original results slips due to school fee arrears has been a long-standing practice. The issue is not about recovering the money.

"MOE funding for each primary school student comes up to $12,000 per year, and each student co-pays only $13 of miscellaneous fees per month."

"If it is about money then the easier solution would be to reduce subsidies and financial assistance," he added.

"MOE’s consideration stems from the underlying principle that notwithstanding the fact that the cost of education is almost entirely publicly funded, we should still play our part in paying a small fee, and it is not right to ignore that obligation, however small it is.

"We hope parents support us in reinforcing this message.

"In the case highlighted by the Facebook posts, the parents did not pay miscellaneous fees for two years despite several reminders, and did not put in any application for MOE or school-based financial assistance which would have covered all the costs.

"The child will still receive a copy of the results, just not the original results slip, and she can still apply for secondary schools and will progress like all students.

"The priority of our educators and our institutions is to ensure that students grow and can fulfil their potential, and we should not allow financial circumstances to become an impediment to their progress and development."

The spokesman said that the authors of the Facebook posts were "trying to call into question the intention and values of MOE".

He added: "Our educators, parents and members of public will have to decide whether MOE’s action is fair and educationally sound, and what the lesson of this teachable moment for our children is."