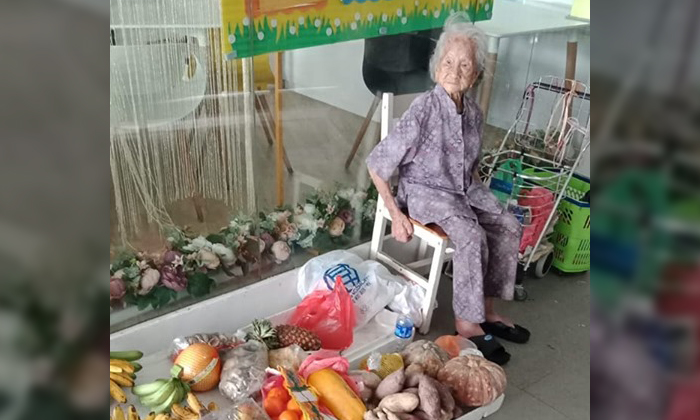 Singaporeans have rallied behind an elderly woman who came under the spotlight after a photo of her peddling her wares went viral.

In a post on Friday (Nov 1), Facebook user Samuel Lee shared a picture that showed the woman selling fruits and vegetables along a corridor at the Thomson V Two condominium.

According to Lee, the 97-year-old woman purchases the items from Sheng Siong supermarket and resells them at a higher price.

He said: "But because of that, no one is willing to buy from her as they can get [directly] from Sheng Siong at a cheaper price."

The woman apparently sets up her makeshift stall at the corridor on Fridays, Saturdays and Sundays.

Lee added in his post: "She did mention that due to her old age, her vision and hearing is failing her and also her memory."

According to Lianhe Wanbao, whose reporters visited the stall, the woman is not in need of money unlike what is implied in the post, which has garnered over 5,400 likes and 11,000 shares to date.

Despite having nine children, the elderly woman insists on doing this because she does not want to stay at home all day. Nor does she want a maid to attend to her.

Her third son, Mr Su, told Wanbao: "My mum used to be a farmer. I am in awe of her because despite her age, she turned down our offer to hire a maid to take care of her.

He also said that his mother had injured her head after falling down while setting up her stall a few months ago. She required four stitches.

"The following day, she went to set up her stall again even though her injury had yet to heal. She just can't sit still," added Mr Su.

The elderly woman, whose stall has been here for 10 years after having been chased out of her previous locations, is a familiar sight to those staying and working in the area.

Regular customers would fork out money to buy the elderly woman's wares so that she is able to close shop earlier and return home.