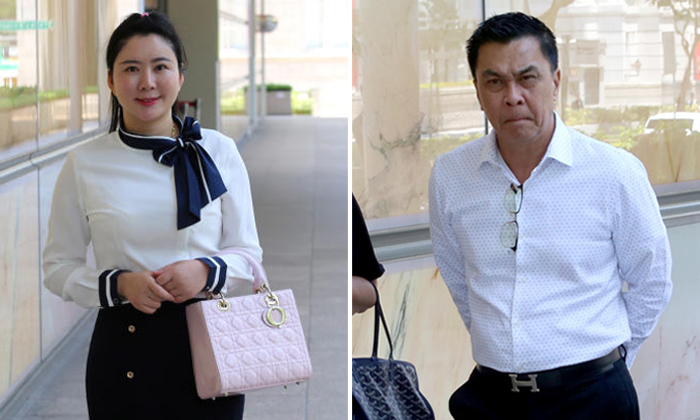 A 55-year-old businessman who paid out $2 million to his mistress over a three-month period has sued her to get back the money, claiming that the sum was a loan.

But property agent Angelina Jiang, 33, has produced chat messages to argue that the money was a gift to her that Mr Toh Eng Tiah was not entitled to reclaim.

Mr Toh, who also goes by the name Andy, said in one message: "Give birth to a daughter will have a reward of 2 million."

In other messages, he told her "don't need to pay the money back to me" and "I have given you $2 million as a gift".

Citing these messages as the case opened in the High Court on Monday (Aug 19), Ms Jiang's lawyer, Mr Mahesh Rai, said Mr Toh was acting "dishonorably" by going back on his word and trying to claw back the money.

"The evidence will show that the parties were in a romantic relationship and that the monies had been given to Ms Jiang unconditionally as gifts," he said in his opening statement.

Mr Lee argued that his client never intended to gift Ms Jiang $2 million and that the series of payments from Mr Toh to her made between December 2016 and March 2017 was a loan that had to be repaid.

Mr Toh runs three companies that collect and sell recycled materials. He has two children from his first marriage and one out of wedlock, but none from his current marriage.

Ms Jiang is a property agent who made as much as $700,000 a year and owns two properties, the court heard. The Chinese national became a Singapore citizen in 2014 and has two children from a previous marriage.

The two met in November 2016, when Mr Toh contacted Ms Jiang after seeing a newspaper advertisement for a property sale.

They soon began a relationship, with Mr Toh showering Ms Jiang with expensive gifts and even giving her the personal identification number to his debit card, said Mr Rai.

At a temple in January 2017, Mr Toh vowed, among other things, to pay her living expenses and credit card bills, set up a home with her and take care of their children, he added.

Mr Toh had told Ms Jiang that he was unhappy in his marriage and asked for her help to look for a divorce lawyer, said Mr Rai.

On March 24, 2017, both parties signed a loan agreement prepared by their respective lawyers.

Prior to the signing of the document, Mr Toh had paid more than $1 million to Ms Jiang, although the exact amount is disputed.

On April 19, 2017, Ms Jiang discovered that she was pregnant and a month later, Mr Toh became uncontactable.

On June 13, 2017, Ms Jiang received a letter from Mr Toh's lawyers, demanding that she repay the $2 million. More than two weeks later, she suffered a miscarriage.

Mr Toh denies fathering her child and to date, has refused to undergo a paternity test.

Mr Rai told the court that Ms Jiang had a DNA profile done of the unborn child, which is waiting to be matched with the father's.

Both sides now argue - for different reasons - that the loan agreement is not valid.

Ms Jiang claims that the agreement was a sham document that Mr Toh could show his wife that he had only lent his lover the money and would eventually be repaid.

Mr Toh contends that the agreement should be declared null and void as he had signed it under Ms Jiang's undue influence and the terms were unfair to him.

However, Mr Toh argues that the document was evidence to support his version that the $2 million was a loan.