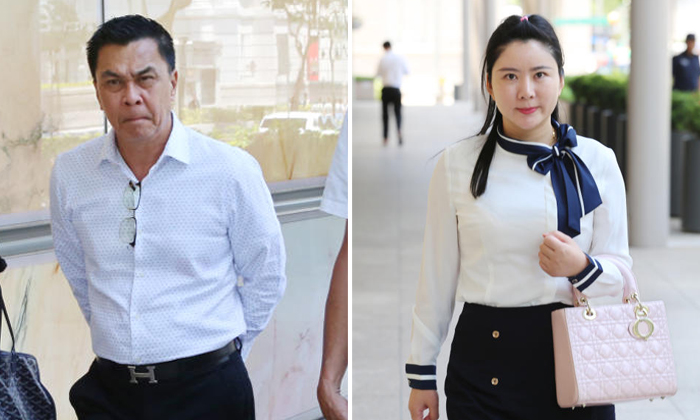 A 55-year-old businessman who is suing his former mistress for the return of $2 million alleged in court that he felt "cheated" when he found out she had unilaterally changed the terms of their loan agreement.

But her lawyer pointed out in cross-examination on Tuesday (Aug 20) that Mr Toh Eng Tiah continued to send sexually intimate messages to Ms Angelina Jiang, 33, even after he found out he had been misled.

Mr Toh was taking the stand on the second day of the hearing of his High Court suit against Ms Jiang to recover the $2 million, which he says was a loan that had to be repaid.

Ms Jiang, a property agent, says it was a gift that he was not entitled to reclaim.

He said he realised he had been duped on April 5, 2017, when his lawyer told him that some terms had been changed from what had been drafted. For instance, the repayment period had been extended to 10 years instead of five.

On Tuesday, Ms Jiang's lawyer, Mr Mahesh Rai, sought to poke holes in Mr Toh's claim that he had been cheated, citing examples of how he continued treating her normally after April 5.

On April 10, Mr Toh addressed Ms Jiang as his wife and told her she was "the person who is the most truthful to me".

In other messages, Mr Toh discussed investment opportunities with Ms Jiang and told her that the $2 million was a gift.

Mr Rai asserted that the continued exchange of messages shows Mr Toh had not been cheated when he signed the amended document, but the businessman disagreed.

Questioned by his own lawyer, Mr Anthony Lee, Mr Toh said his feelings for Ms Jiang faded after he found out about the amended contract.

But he continued to communicate with her because she had promised to return him the money earlier than stipulated, he said.

Mr Rai also sought to establish that the loan agreement had been concocted by the pair to placate Mr Toh's wife, Ms Chong Lee Yee.

After discovering the affair, Ms Chong had phoned Ms Jiang in January and told her to leave Mr Toh, saying he was "not a good man" and had many girlfriends.

Mr Rai contended that on March 20, Mr Toh phoned Ms Jiang and told her that his wife was making things difficult and he needed the loan agreement to show his wife that his mistress was not after his money.

Mr Toh also told Ms Jiang his wife was unhappy and jealous because he was only willing to give the latter $3 million and two properties despite their 10-year marriage.

Related Stories
Businessman, 55, sues mistress, 33, to recover $2 million 'loan' -- which she says was a gift
Married man wants $30k back from mistress, says she replied: "It's $300 for each time we were intimate'
OG founder's married grandson harassed husband of alleged lover with topless photos
More About:
affair
couple
court
money