Missed out on your dream HDB unit? Get a 'stunning' 4-room Bedok Reservoir Rd flat for just... $1 million 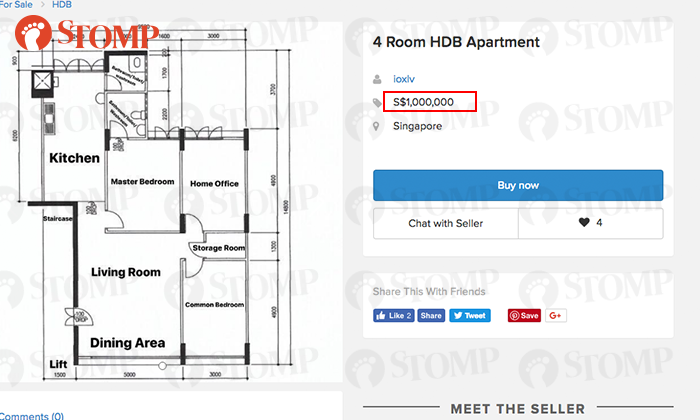 Anyone who stays in Singapore can testify to the hefty prices of flats here.

One seller may have just taken it to a new level, listing a 4-room flat in Bedok Reservoir Road at a  whopping $1,000,000 on market platform, Carousell.

Stomper Lido came across the posting and alerted Stomp to it.

The flat has also been ’tastefully renovated’, with minimal built-in items, a water heater system and fibre termination points.

If you’re worried about security, fret not.

For those obsessed with their letters, the unit even comes with not one, but two letterboxes - one private letterbox and a general one.

However, the lister also stated that prices are negotiable.

If this sounds like your dream flat, do contact the buyer for a tour, as no photos were provided at the time of the article, as in the lister’s words, “there is simply no way these photographs would ever do justice to who stunning the apartment is”.

Related Stories
Missed out on tickets to Bruno Mars' concert in Singapore? You can get them online...for $999
It's like Coldplay all over again: Scalpers resell Ed Sheeran concert tickets at much higher prices online
Girl buys original concert tickets for $520 -- only to realise they're invalid, with money refunded to initial buyer
More About:
HDB flats
expensive
Carousell