Girl buys original concert tickets for $520 -- only to realise they're invalid, with money refunded to initial buyer 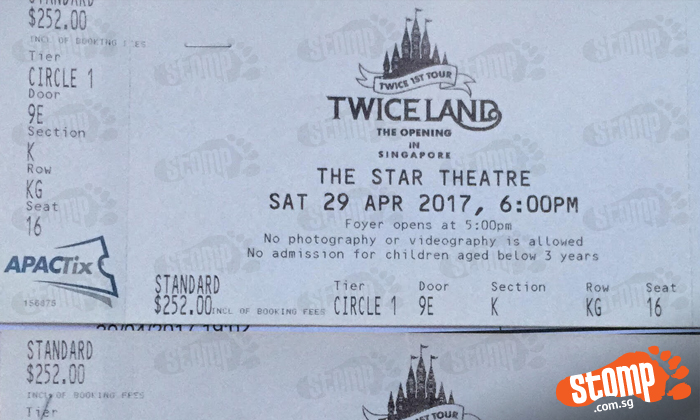 Stomper Doris and her daughter bought a pair of concert tickets online, only to later realise that they were invalid as they had already been cancelled, with the money refunded to the person who originally bought them from the organisers.

The tickets were for Korean girl group TWICE's first world tour, TWICELAND, held at The Star Theatre on Saturday evening (Apr 29) at 6pm.

They originally cost $252 each, but Doris and her daughter paid a higher price of $520 for two tickets from a Carouseller.

According to a police report that has been made, the seller and buyer had arranged to meet at Block 119 Rivervale Drive on Mar 15.

"Before meeting with him, we called the concert organisers to ask about the tickets' authenticity. They advised that if the tickets are original tickets and not e-tickets, it should be safe enough. They further taught me about what to look out for on original tickets."

The tickets that the mother and daughter purchased were indeed original -- but were invalid because they had been "cancelled and refunded to the initial buyer", said Doris.

She added, "Though I cannot really blame APACTix for this scam, I cannot believe that tickets can be refunded without collecting back the original tickets nor did they warn me that there is such a situation where refunded tickets are not destroyed!"

Doris, who has also lodged a complaint with Carousell, told Stomp in a phone interview that when she asked the Carouseller about the incident, he told her that he did not know that the tickets were invalid.

She said, "The unbelievable thing is that the tickets I bought were ORIGINAL tickets and NOT e-tickets.

"I want to share this experience so that you can avoid being scammed."