It's like Coldplay all over again: Scalpers resell Ed Sheeran concert tickets at much higher prices online 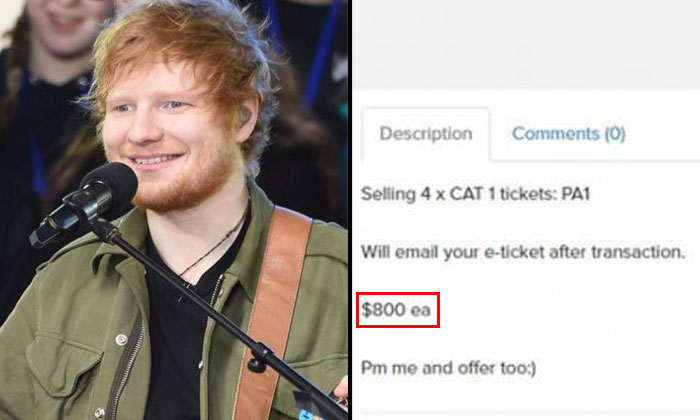 Tickets for Ed Sheeran's world tour concert at the Singapore Indoor Stadium on Nov 11 and 12 are being sold at online marketplace Carousell and online ticket exchange website Viagogo for up to $2,750.

This happened after tickets to the British singer's two-night concert were completely sold out yesterday.

The original price of tickets to Sheeran's concert ranged from $108 to $248. The first round of tickets, which went on sale yesterday at 10am, were sold out within 40 minutes.

Show promoter AEG later announced ticket sales for Nov 12 at 11am, which were also snapped up. This is Sheeran's second time in Singapore. He was last here in 2015.

Diehard fans and parents The New Paper spoke to were disappointed with the way the tickets were sold.

A ticket buyer who wanted to be known only as Mr Chan said he waited from 9.15am but was stuck in a waiting room till 11am.

The 20-year-old student wanted to purchase a pair of CAT 3 tickets for a friend, and said he was also not aware of the second show until it was launched.

"If they wanted to add a second show, they should have done it better and given prior notice to interested buyers."

Another student, Mr Z.L. Zhu, 20, said: "I queued online for the second show for half an hour, but it was all sold out already. I later went onto Carousell, and saw a person selling for $800.

"It's just like Coldplay all over again. It's very inconsiderate of those who just purchase the tickets to re-sell them later at a higher price. I hope the organisers will do something about it."

A parent who only wanted to be known as Madam Christina, 55, told TNP that she felt bad when her son told her that he did not get the tickets.

"I went online and found that many people were re-selling their tickets at ridiculous prices. I thought of purchasing them, but they were so expensive and it would be better to use the money to travel overseas to watch instead," said the mother of three.

Carousell told TNP that it takes feedback and complaints seriously and users should report any suspicious activity so that the team is alerted and can investigate and take necessary action.

"We encourage our users to be cautious and practise due diligence when arranging any deals, even on tickets," said a spokesman.

Viagogo did not respond to queries by press time.

A notice on Sportshub's website said the resale of tickets at any price in excess of the initial purchase price is prohibited.

A spokesman for Sportshub added that it does not condone the resale of event tickets from non-authorised ticketing agents, and that this could lead to seizure or cancellation of the tickets without a refund.

In March, two men were arrested for their involvement in Coldplay concert ticket scams on Carousell. They allegedly instructed buyers to transfer money to their bank accounts, but failed to deliver the tickets and could not be contacted after.

If found guilty of cheating, the pair can be jailed for up to 10 years and fined.