Men in loud squabble over screen at Singapore Pools outlet: 'You think I scared ah?' 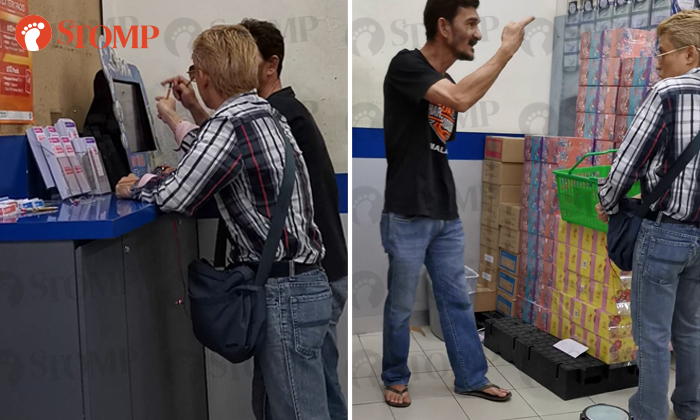 Submitted by Stomper The Rock

People can be easily set off by the smallest things when their emotions are on a high, such as over long queues, a bad haircut or being tutted at.

Two men were seen in a loud quarrel at a Singapore Pools outlet in Jurong Point on Saturday afternoon (Jan 18).

Stomper The Rock witnessed the incident that occurred in a supermarket at around 12.45pm and submitted videos to Stomp.

He said: "I was in the queue to buy lottery when these two men started quarreling.

"I believe they were both rushing to press the screen that allows people to check betting results. The black-haired guy was using the screen and the blonde guy got impatient."

In one video, two men can be seen in an argument, with the blonde-haired guy apparently giving the dark-haired one "five minutes" more on the screen and telling him to "faster".

The blonde-haired guy then says, "You no time ah? You got time ah?"

The dark-haired man replies, "I got time ah!" which leads to the blonde-haired guy saying, "You got time then I wait for you so long ah?"

Both men are then seen tapping the screen with force.

When told to "Eh you wait!" by the dark-haired man, the blonde-haired guy responds, "I wait very long, headache ah, no more wait ah!"

In another video, both men are heard telling each other, "You think I scared ah?"

The dark-haired man can also be heard hurling a vulgarity.

Stomper The Rock added: "The two men almost got into a physical fight.

"Perhaps there should be a higher level of security in case fights really break out, especially since there are many elderly people around."

Related Stories
Auntie 'tsks' at 14-year-old boy at Clementi Mall... and all hell breaks loose
Uncle scolds man at Bugis Junction supermarket: "When I was your age, I was 100x more handsome than you"
Auntie throws items about and goes on rant outside Toa Payoh salon -- over haircut she got in 2018
More About:
dispute
argument
queue
4D
toto