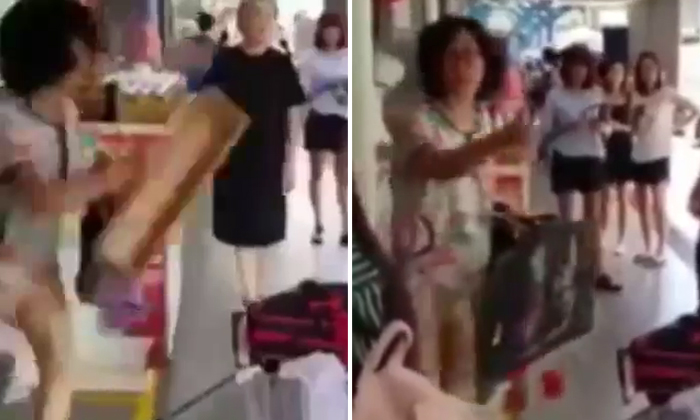 Resentment runs deep for a woman who remains bitter over an unsatisfactory haircut that she got at a salon in Toa Payoh in 2018.

She reportedly expresses her unhappiness every time she passes by the salon, with her most recent tirade occurring on Sunday (Jan 5).

A video circulating on Facebook shows the woman, who appeared to be in her 50s or 60s, hurling out bulky items from her shopping trolley.

She can be heard exclaiming about how her hair used to reach her waist after growing it out for "five plus two years" and shouting, "Cut until so short for me!"

Lianhe Wanbao reporters visited the salon at Block 111 Lorong 1 Toa Payoh, where a staff member revealed more about the saga.

The first time, she requested for a perm and dye job.

On her second visit, she asked for her hair to be trimmed and dyed. That's when the trouble began.

Ms Xu recounted: "At that time, the auntie had waist-length hair and requested for it to be cut until above the neck. We confirmed with her multiple times and she said she would like it cut this way.

"However, she stood up and left right after the haircut."

After some time, staff noticed that the woman was gone and tried texting her.

The auntie only returned to the salon at around 11pm, but refused to pay for the haircut and repeatedly asked, "Why should I pay?"

Ms Xu offered to charge the auntie half the usual price. This would amount to $30 to $40.

The auntie refused and left in a huff.

Ms Xu said meeting unreasonable customers can only be blamed on bad luck, and that the salon has blacklisted the auntie ever since.

However, the auntie remained upset and would start ranting every time she passed by the salon.

The same thing happened on Sunday, so Ms Xu went forward and tried to stop the auntie, only for the latter to get even more triggered.

Staff and customers from the salon tried to break up the dispute, and the scene only came to an end when police were called.