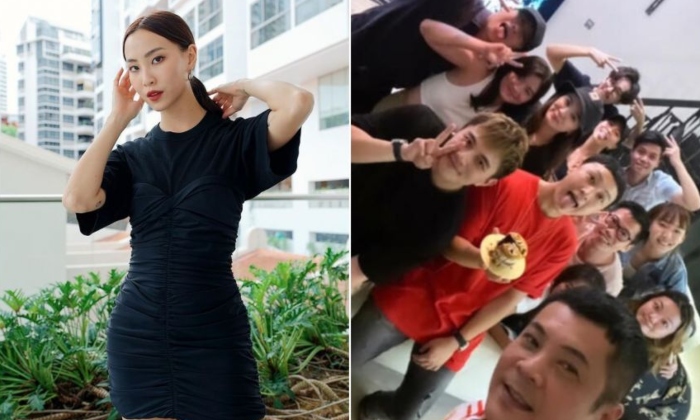 Deejay Sonia Chew has been dropped from hosting Mediacorp's annual countdown show amid investigations into whether Covid-19 safe distancing regulations were breached at a birthday party for actor Jeffrey Xu.

The 29-year-old 987FM presenter, who attended the party, was supposed to host the countdown show Let's Celebrate 2021 with deejay Joakim Gomez, but has been replaced by fellow deejay Jean Danker.

Local broadcaster Mediacorp said in a statement to The Straits Times: "We take this matter seriously, and constantly brief and remind our artists to adhere to safe management guidelines at all times. We are also cooperating fully with the authorities on their investigations.

"In the meantime, Jean Danker will be hosting Let's Celebrate 2021 with Joakim Gomez. "

Chew was among several artists spotted in a picture taken at Xu's 32nd birthday, which was uploaded by Xu on Oct 3 onto his Instagram Stories.

It showed 13 people at the celebration, in what looked to be a private residence, with Xu holding a cake. Celebrities spotted in the picture includes Xu, Chew, actors Terence Cao, Shane Pow, Jeremy Chan and actress Julie Tan. No one was wearing a mask.

Earlier this month, a reader alerted Chinese newspaper Shin Min Daily News to the picture. Mediacorp -which manages Xu, Chew, Pow and Cao - later issued a statement, confirming that the picture was taken in October and adding that its artists apologise for their mistakes.

At that time, only up to five could gather outside the household and each household had a limit of five visitors at any one time.

The Ministry of National Development (MND) said it had been alerted to the incident and that investigations are ongoing.

All the stars spotted in the picture have since made apologies on their personal social media accounts as well. Tan, who is managed by actor Li Nanxing's talent agency, was the first to do so on Thursday.

The rest, who had previously kept quiet about the scandal on their social media accounts, all said sorry on Saturday.

Chew explained in her post: "I was invited to have drinks with what I understood to be a small group of people and was not aware it was a birthday celebration."

She clarified that she was not making excuses for herself and emphasised that she failed to remove herself from the gathering when she saw more than five people at the scene.

She said it had been a tough time for her family to see her "distraught" over the incident.

She added: "It's not in my nature to cause trouble or partake in any activities that would put people at risk. It was a severe lapse of judgment on my part in this case and from the bottom of my heart, I am so sorry."

Similarly Pow, 29, wrote: "I'm deeply regretful of my actions and risking the health and wellness of the people around me by flouting safety measures. I will do better, I will be better, and I will set myself to a better standard than I was."

Cao, Xu and Chan also apologised and took responsibility for not setting a good example as public figures.