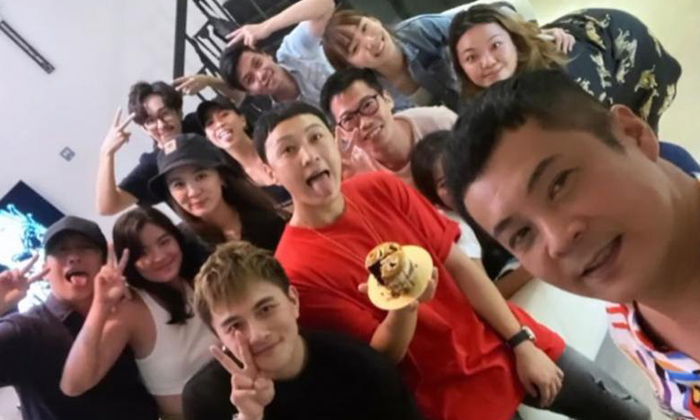 Mediacorp artistes are being investigated for possible breaches of safe distancing measures after a group gathered at a residence to celebrate actor Jeffrey Xu's birthday.

In response to queries from The Straits Times, the Ministry of National Development (MND) confirmed the probe, saying it was alerted to the incident.

"Investigations are ongoing in respect of possible breaches by the various parties," a spokesman said without identifying the individuals implicated.

"MND and other government agencies take a serious view of such breaches, and will not hesitate to take firm action against those who are found to have violated safe distancing measures."

Mediacorp celebrities - Xu, Shane Pow and Terence Cao - apologised on Wednesday via the broadcaster after photos of them apparently breaching Covid-19 regulations were posted on social media.

One picture, reportedly uploaded on Oct 3, showed 13 people standing close to each other, with Xu holding a cake.

No one was wearing a mask.

Under current Covid-19 regulations, social gatherings have to be limited to groups of five outside a residence. Households may receive up to five visitors at any one time.

From Dec 28, social gatherings are increased to groups of eight outside the home and households may receive up to eight visitors.

A Shin Min Daily News reader had tipped off the Chinese language publication on Wednesday that Xu, who celebrated his 32nd birthday on Oct 3, had posted an Instagram story of a large gathering.

The attendees included other celebrities like Jeremy Chan and Julie Tan, who are not managed by Mediacorp.

Mediacorp said in a statement to Shin Min that the three stars under its management - Xu, Cao and Pow - confirmed that they were at the gathering.

It said the three "deeply regret" their actions and apologised for their mistakes.

In an updated statement to The Straits Times, Mediacorp said 987FM deejay Sonia Chew was also at the gathering.

The broadcaster added it takes safe distancing and Covid-19 regulations seriously and reminded its artistes to follow such rules in both their professional and personal capacities.