No masks and SafeEntry, crowds mingling: Some still partying at Golden Mile like no Covid-19 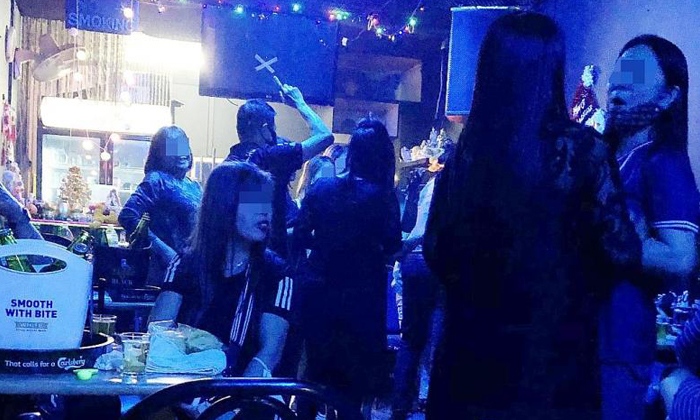 Most people in Singapore have been disciplined in the fight against Covid-19 by observing safe distancing measures and adapting to changes amid the new normal.

But an underground scene appears to have taken root in some places where safe distancing is ignored and caution is cast to the wind.

Behind shuttered shop fronts in Golden Mile Complex, illegal gatherings of large groups partying have allegedly been going on since June.

Shin Min Daily News yesterday reported on a party where about 30 people were crammed into a small bar on the second storey of the complex on Monday.

The Chinese language newspaper said a 50-year-old woman had thrown the party for her boyfriend's birthday, with attendees invited by word of mouth.

The bar reportedly did not implement SafeEntry or temperature taking, and customers were allowed to mingle freely without masks.

Scantily clad women were seen on a makeshift dance floor with loud music while patrons drank alcohol and socialised.

Shin Min cited a source who said that several bars and pubs in Golden Mile Complex have been operating illegally in such a manner since June.

"If you come on weekends, you'll see the bars here filled with people completely ignoring the pandemic," said the unnamed source.

"When the authorities show up, the operators will just pull down the shutters and continue operating illegally afterwards."

At least eight such bars were packed with people in the complex on Monday night, Shin Min reported.

The police have carried out raids in the strata mall and arrested people for allegedly flouting safe distancing measures.

In August, six men and four women were fined between $4,000 and $8,000 for breaching Covid-19 measures by having an illegal social gathering in a shop unit at Golden Mile Tower.

Last month, 30 women were arrested after the police raided Golden Mile Complex and other locations. Eight of them were investigated for breaching safe distancing measures.

Mr Joseph Ong, president of the Singapore Nightlife Business Association (SNBA), told The New Paper that he had heard of illegal parties being organised by errant nightlife operators but thought they were isolated incidents.

"I did not know they were so blatant at Golden Mile. It seems like the place has become something of a hive," he said.

He urged the operators to approach the SNBA to work out a solution to help their businesses instead of flouting the rules and putting the community at risk.

"It took us so long to get to phase three, with all the nightlife businesses pulling together," he said.

"It would be such a waste if this small group of operators destroys the hard work done by the 2,000-plus nightlife outlets for almost a year.

"Operating in an illegal, underground manner is definitely not right and it is risky for the public," added Mr Ong, who noted that contact tracing would be difficult if clusters were to develop.

In May, South Korea struggled to deal with a massive outbreak originating from a nightclub in Itaewon. The cluster saw more than 200 linked cases and thousands needing to be tested.

Stressing that action must be taken to prevent a similar situation happening here, Mr Ong said: "The penalties must be severe for those involved."

Anyone convicted of breaching safe distancing measures can be fined up to $10,000 and/or jailed for up to six months. The penalties can be doubled for repeat offenders.