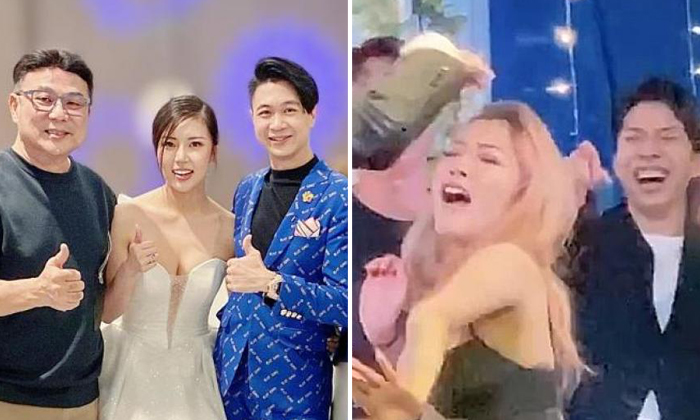 As the Covid-19 pandemic worsened in March, Ah Boys To Men star Maxi Lim postponed his wedding reception, writing on Instagram that it was "the most socially responsible thing to do".

But when he and his wife, influencer Lizy Teo, who registered their marriage in late March, finally held the reception at One Degree 15 Marina in Sentosa Cove on Sunday, some attendees allegedly threw caution to the wind by ignoring safe management measures.

In videos and photos of the event posted on social media, Mr Lim's Ah Boys To Men cast members Charlie Goh, Joshua Tan and Noah Yap, emcee Justin Misson and others, including influencer Nicole Choo and comedians Fakkah Fuzz and Jai Kishan can be seen performing and playing games onstage without wearing masks or face shields.

Some guests at the reception were also seen intermingling and not wearing their masks during the march-in.

A reader who tipped off The New Paper yesterday said he had made a complaint to the Singapore Tourism Board (STB) after seeing the posts.

The reader, who is in his 30s and declined to be named, said: "I held my wedding recently and I am aware how the guidelines may put a damper on the joyous occasion.

"However, just like other couples who got married during this period, we know the importance of these guidelines and many of us, with constant reminders from the venue provider, followed (them) despite all the inconveniences," he added.

"To see a public figure ignoring such guidelines blatantly is disheartening. It is also ironic to see public figures breaking the rules when they had been advocating the public to observe safe management measures."

STB director of hotel and sector manpower Tan Yen Nee told TNP in a statement that STB is aware of the allegations and is investigating.

Under current rules, wedding receptions cannot exceed 100 people split across multiple zones of up to 50 people each.

Receptions with more than 20 attendees must be split into a designated core wedding party of up to 20 people, including the bride and groom, and groups of up to five people for the remaining guests.

It is not clear which of the attendees at Mr Lim's reception were in the core wedding party.

A safe distance of at least 1m must be observed between groups and the wedding party at all times, including for photo-taking.

Live performances are not allowed, and event emcees and people making speeches are also required to wear face shields or masks when speaking onstage.

Said Ms Tan: "STB... takes a serious view of any breach in safe management measures within hotel premises... Strict enforcement action will be taken against errant businesses or individuals, which may include fines, temporary closure and prosecution to the full extent of the law."

One Degree 15 Marina's acting general manager Jonathan Sit said before any wedding, its operations team will brief the couple and wedding coordinators on the necessary measures, and go through the programme to ensure there are no games, singing or shouting.

"Should there be breaches during the wedding, our staff and managers will immediately tell the guests and even the wedding couple to stay in their seats," he said.

Mr Sit did not say whether the club had done this during Mr Lim's wedding reception, and did not directly address queries on the alleged breaches.

He added: "As a venue operator, we share the same challenges that government-appointed social distancing officers across the island face every day in doing their jobs, but we will continue to carry out all these measures that we have already put in place."

The Straits Times reported on Monday that One Degree 15 Marina was one of 10 hotels and hostels to have been fined for breaching safe management measures.

Mr Lim, Fly Entertainment, which manages several of the attendees at the wedding, and other guests that TNP reached out to did not respond to queries by press time.

Related Stories
No masks and SafeEntry, crowds mingling: Some still partying at Golden Mile like no Covid-19
Gathering at Robertson Quay for "chatting and drinks": 7 fined, work passes for 6 revoked
Police find students illegally gathered in shophouse after being alerted to altercation
More About:
Wedding
celebrity
Covid-19
crowd