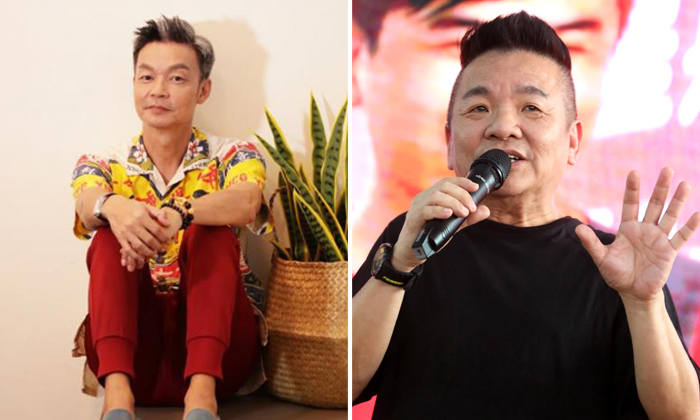 Only real friends tell you the truth as it is. And that was exactly what local actor Mark Lee did in the latest episode of #justswipelah.

“He did all that and decided on who he wanted to be with and he moved to Johor Baru. At the end of the day, you are all alone. That to me is all part of his karma,” Lee said succinctly, when asked about Marcus Chin’s failed relationship and becoming penniless.

He and hosts Dennis Chew, Chen Biyu and Wang Lei shared their thoughts on Chin’s recent interview in Hear U Out.

Chin told host Quan Yi Fong that he had nothing left in his bank account when he returned to Singapore.

In 2009, he had a widely-reported affair with his personal assistant Eileen Cheah. He was 56 and she 24 at that time. Their daughter was born in a year later.

Chin moved to JB to be with Ms Cheah and their daughter following his court case with ex-wife Murong Ying over maintenance support.

But Lee, 53, who owns the talent company that manages Chin, said that the artist did not let his relationship woes diminish the effort he put into his work.

Getai veteran Wang Lei, 60, was more empathetic. He said he was “dumbfounded” when he found out that Chin was broke.

Wang Lei said Chin had been a great help to him, especially during his own desperate times.

“When I first entered the industry, all my clothes were given by him. He also gave me my first branded outfit,” Wang Lei said, holding up a yellow T-shirt. “I still wear it to this day.”

Chin might have financial problems but that has not stopped him from extending generosity to his friends.

In Hear U Out,  he said he has been buying breakfast for his fellow Love 972 Breakfast Quartet deejays five days a week for the past seven years.

A quick calculation indicated the total sum to be around $21,000.

Chew quipped: “If you feel it is too costly and tiring… let us know and we will pay you $50 a month starting from next month.”