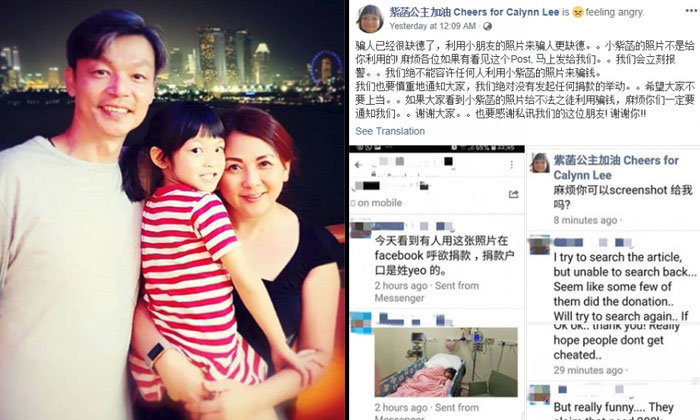 Come across someone asking for donations to help a sick girl lately?

Don't get duped, local comedian Mark Lee and his wife Catherine Ng warned in a Facebook post on Wednesday (Aug 29).

Someone is attempting to raise $200,000 on Facebook by using a photo of their youngest child Calynn lying in a hospital bed.

The couple was alerted to the fraud by a Facebook user.

Angered by the scam, they wrote: "It is immoral to cheat others. It's even worse to use a child's photo to do so."

Posted by 紫菡公主加油 Cheers for Calynn Lee on Wednesday, 29 August 2018

They urged those who have come across the fundraising post to contact them so that they can gather evidence and file a police report.

Lee and his wife also emphasized that they did not start any fundraising campaign for Calynn's medical treatment.

Earlier this month, the five-year-old was hospitalized and diagnosed with glomerulonephritis, a rare medical condition in which the immune system attacks the kidneys.

Posted by 紫菡公主加油 Cheers for Calynn Lee on Monday, 6 August 2018

Calynn is gradually getting better, her mum wrote on Cheers for Calynn Lee, a Facebook page that was set up to ask for advice regarding her medical condition.

It will take Calynn about six months to complete the prescribed treatment, she said in an update on Aug 21.

She also thanked the public for their advice and well-wishes.

Related Stories
What to do if you receive text demanding $5,000 for 'kidnapped' daughter
Text from foreign number offers woman $100k prize for her 'singtal' number -- in broken English
Employees allegedly pull auntie into beauty salon for facial, bring her to ATM to withdraw $550
More About:
scam
Mark Lee
sick
illness