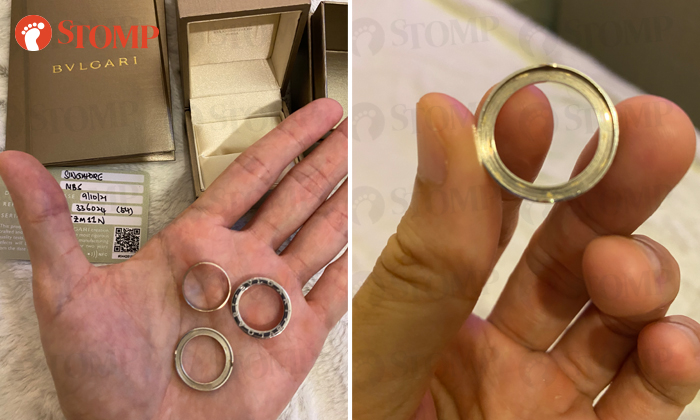 When you fork out thousands for a luxury brand item, the least you can expect is for it to last.

Unfortunately, that was not the case for Stomper Joel and his partner, who had splashed out $4,400 on a pair of rings from Italian luxury brand Bulgari to celebrate their fifth anniversary.

The couple had purchased the rings, costing $2,200 each, from the BVLGARI store at Marina Bay Sands in October 2021.

Just two months later, however, one of the rings broke apart into three pieces after falling off a table and hitting the ground.

Joel said: "Have you seen an authentic Bulgari ring break into pieces? Unfortunately that’s what my partner and I experienced on December 7.

"Costing more $4,000 in total, we expected the rings to last after getting them for our milestone anniversary. Imagine our great horror when we saw one ring break into three pieces after it fell off our dressing table one morning.

"We had been under the impression that each ring was one whole solid piece. Not once were we told that this ring was assembled from three components.

"Given how much Bulgari charges for their rings, one would have never thought that they would come apart at just one drop on the floor. Even a ring costing a couple of hundred dollars would not have shattered into pieces.

"This pair of rings was meant for our fifth anniversary and having a broken ring right at this point in time is really distasteful.

"To make matters even less pleasant, Bulgari’s response and follow-up was not what you would call 'going beyond the extra mile',

"When we asked Bulgari what they would do for the ring, their staff requested for the accessory to be sent for their assessment for a few days.

"The assessment took about a week but we were not given any insights on why the ring would fall apart. The verdict was simply put across as 'no intentional damage by the customers'. We didn’t even know if the ring was originally defective or not."

According to Joel, he was then offered three options: 1) to get the original ring repaired, 2) to get a brand new replacement or 3) to get a refund only for the broken ring.

The Stomper added: "Having a repaired ring sounded ridiculous to us. Why would anyone want a broken ring back?

"Getting a new replacement was to be expected, since the ring was under warranty. However, knowing that we will never be 100% confident of not dropping the ring again for the rest of our lives, this option sounded downright improbable to us. And we know what will happen if it drops again.

"So while we are inclined to ask for a refund, Bulgari declined to provide a refund for both rings as the other ring was not damaged and some customisation had been done.

"However, we don’t quite understand what’s the point of having one ring left when it’s supposed to be a PAIR of anniversary rings."

Left without much of a choice, Joel said he eventually accepted the refund of $2,200 for one ring while being "made to keep" the other.

He told Stomp: "Every couple’s anniversary milestone means something special and worthy of commemoration. We had chosen Bulgari’s rings to mark our milestone since it’s a prestigious brand.

"However, with just one ring left now, it has made our milestone memorable for the wrong reasons.

"The brand being Bulgari, we had expected them to show exemplary sincerity and customer service for such a situation, but I guess our expectations were misplaced.

"Throughout the purchase, the sales staff did not reveal to us that the ring was made up of three pieces. From the pictures, you can see that the broken parts look cheap!

"If you are thinking of getting a Bulgari ring for your anniversary or wedding, make sure you select a model that's not assembled from parts.

"Imagine if a nervous bride or groom accidentally drops the wedding ring during their exchange of vows. If they had chosen our ring, we cannot imagine how much embarrassment and awkwardness there would be in front of family and guests.

"Think carefully when thinking of what rings to buy!"

Related Stories
InterContinental Singapore apologises to customers disappointed with its mooncakes
Woman's manicure goes wrong: "Now I have no nails, no manicure and no money!"
Floral Garage says woman's complaint about damaged bouquet is 'based upon ignorance about flowers'
More About:
damage
bad service
luxury
expensive