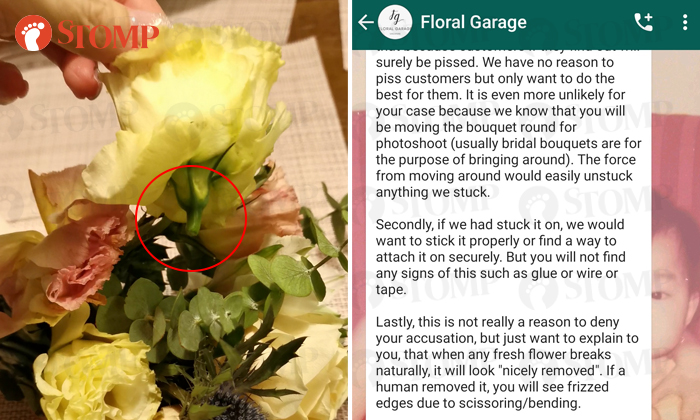 Local florist company Floral Garage has refuted complaints from a customer who alleged that she received damaged flowers in her bouquet.

Stomper Cin had ordered a Bridesmaid’s Bouquet for $42.80 from Floral Garage on August 30.

The bouquet was scheduled to be delivered on September 3 for her pre-wedding photoshoot on the same day. It was delivered at 11am and left on a chair outside Cin's house as requested.

Cin said: "I was out for a morning wedding shoot and came home at around 2pm to change for my afternoon shoot, which required the flowers.

"I had requested for the flowers to be delivered 10am-2pm, and they did deliver it and put it nicely on the chair outside my house.

"It was wrapped with plastic wrap around the flowers and the bottom was covered with moist cottonwood and plastic. This was good.

"I brought the flowers in the house without unwrapping the plastic as I was rushing to touch up and redo my makeup etc.

"I left house again at 3pm and did not open the plastic wrap until I arrived at my photoshoot location at 3.30pm.

"To my shock, one stalk was already bent and one flower bud dropped out of the bouquet like it had been cut off nicely."

A video that Cin shared shows how one flower drooped down with its stem bent while another flower was detached from its stem.

The Stomper added: "We tried to tear the bent stalk away as it was at the edge of the bouquet and it just drooped down totally. It cannot be torn away as the stem was very tough. Thus, we were amazed how the other flower bud could drop off so nicely from its stem!"

Cin said the photoshoot ended at around 6pm and she went home to take the above video. 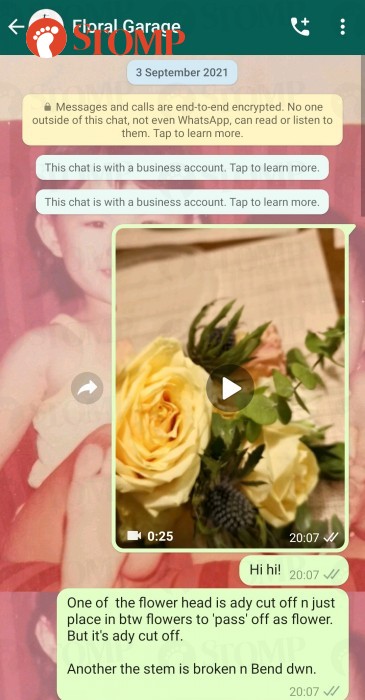 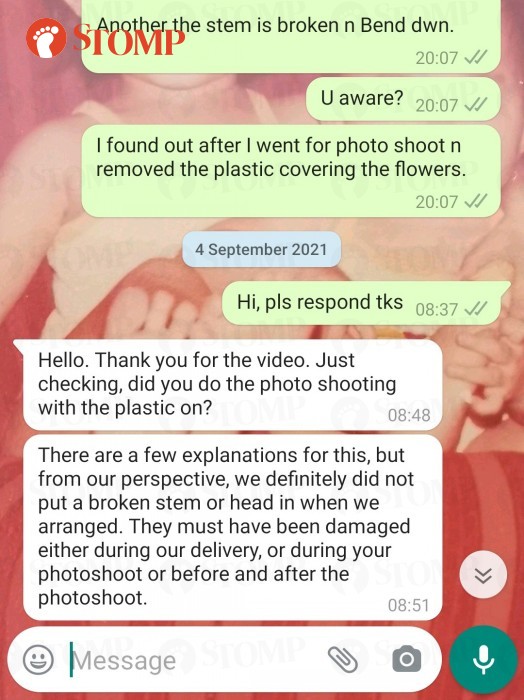 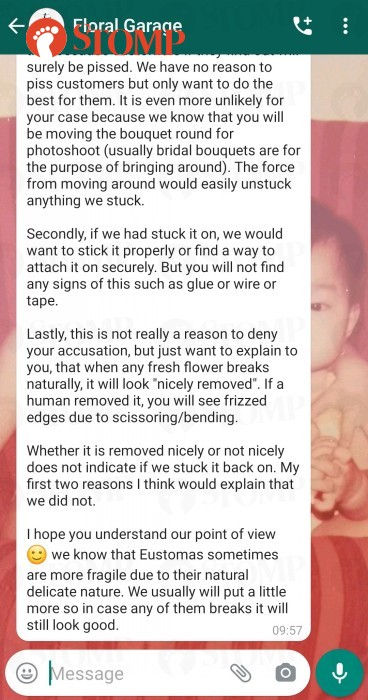 Floral Garage told Cin that the flowers "must have been damaged during our delivery, or during your photoshoot, or before and after the photoshoot."

It denied placing the detached flower back into the bouquet and said it would have reattached the flower "properly" if it had intended to do so.

The company also explained that natural breakage of flowers would make them look "nicely removed". On the contrary, there would be frizzed edges if removed by a human hand.

"We have no reason to piss (off) customers," it added.

Cin told Stomp: "We were so upset by their response!

"I decided to search if they have had similar complaints and discovered they have a bad record on news sites. I feel so cheated."

Responding to a Stomp query, Floral Garage shared further screenshots of its conversation with Cin and said: "Firstly, the flower that broke is an eustoma, which itself is a fragile flower. You can Google it or consult a flower expert. Should an eustoma flower break off naturally, they would be broken off cleanly." 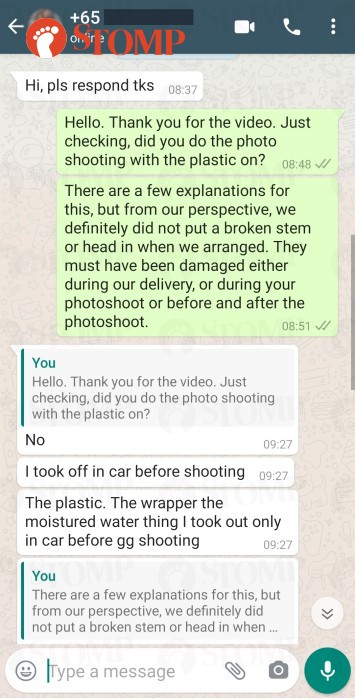 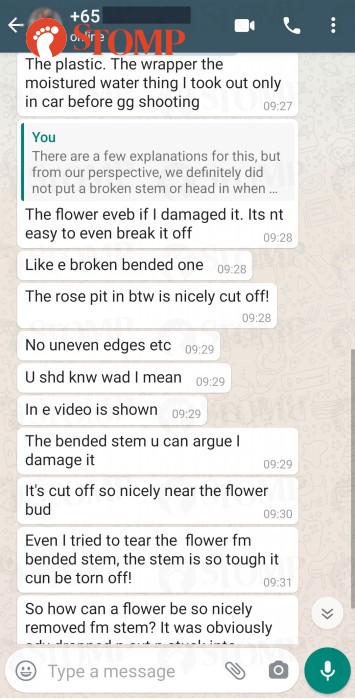 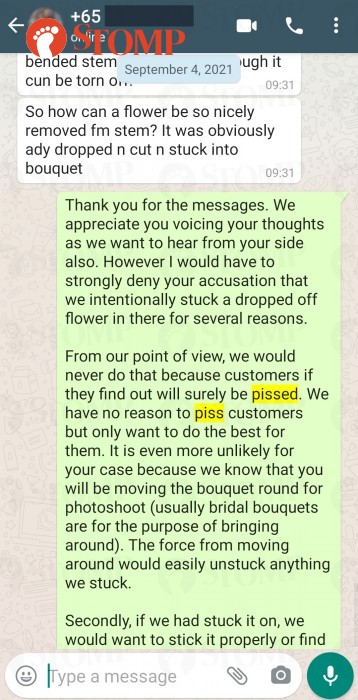 The company also denied that the bouquet was already damaged when delivered.

Floral Garage said: "Secondly, the bouquet was delivered at around 11am. The customer only gave the feedback at 7pm+ as you can see in the screenshot.

"As it was for a photoshoot, she may have walked around with the bouquet all day and damaged the flowers herself. In our screenshots, she conceded this possibility.

"Thirdly, her point is that we intentionally tried to fool her by putting a broken head back into the bouquet. This is simply false and we do not ever do such a thing. we have explained our reasons in the lengthy message for her kind understanding.

"To summarise, whether the eustoma broke off cleanly or not does not imply that we stuck it back. Even if it is not broken off cleanly (for example, if we accidentally broke it) and we wanted to stick it back, we could also do it.

"But we have never done and would not ever do such a dishonest thing, and we would gain nothing from it but wrath from customers if we are found out.

"Fourthly, she has not responded to our message for any resolution and went straight to Stomp.

"We pride ourselves on our excellent product quality and high service standards. You can see our online reviews especially on Google. Those reviews are all genuine. We can even provide the names and contact information of those reviewers.

"Should our product have any issue due to our doing, we will definitely rectify it. If a laptop is accidentally scratched after using it for a while, it would be unfair for one to claim warranty for it.

"In our opinion, this matter is not even newsworthy as her complaint is based upon ignorance about flowers."

In response, Cin explained that she did not contact Floral Garage immediately upon discovery of the damaged flowers as she was in the midst of her photoshoot.

She told Stomp: "I did not have time to text Floral Garage as I had to finish my photoshoot first since I'm being charged by the hour.

"Even now, they only explained that the flowers are fragile. They did not acknowledge the bent stalk and said it was either damaged during delivery or my photoshoot.

"So? What does that mean? That it's not their fault and I should accept this? Well, it seems they are still insistent on suggesting that I was the one who spoiled the bouquet.

"I have never complained about any other businesses I've bought from, especially a florist! None had this issue of a broken stem and a whole dropped-out bud!

"This is the first time I've encountered something like this and definitely a bad experience with Floral Garage. Just look at their bad history."

This is not the first time Floral Garage has made headlines for upsetting its customers.

On Valentine's Day last year, the company received flak for hurling the F-word at a Stomper who complained about an unsatisfactory bouquet. It also shut down another woman who said she received rotting roses.

In 2017, it failed to fulfil multiple Valentine's Day orders.

Cin added: "A leopard will never change its spots. Seeing how many times they have gotten complained about, I am just suay to kena from them this time. "

Related Stories
After hurling F-word, Floral Garage shuts down another customer who received rotting roses
Florist company and customer hurl F-word at each other after complaint over $74.50 bouquet
Two florists break customers' hearts by failing to fulfill over 350 orders on V-Day
More About:
rude
bad service
text