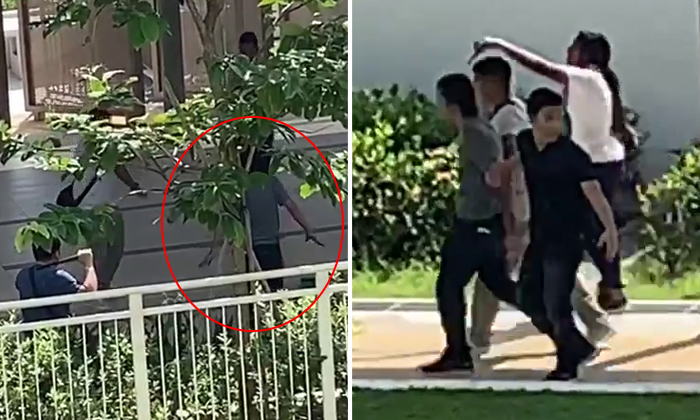 A 55-year-old man was arrested after a stand-off with the police at Woodlands Rise on Monday morning (July 29).

Facebook user Muhammad Raihan posted a video and photos of the incident, showing the man surrounded by several plainclothes police officers who were armed with batons.

The man was initially holding an object in his hand, but appeared to throw it onto the ground afterwards. An officer can be seen kicking the object away.

The man is later seen being restrained and led away.

Mr Raihan, who identified the object that the man was wielding as a knife, added: "A white screen, speakers and two microphones [were in the background] because there was a group of kindergarten kids having their National Day Parade rehearsal when this incident took place.

"The school teacher brought all the kids back to school for safety."

In response to a Stomp query, the police confirmed that the man was arrested for his suspected involvement in a case of theft during a police operation conducted at Woodlands Rise at about 11am.

Related Stories
Man who got tasered and pinned down by police officers at Everton Park arrested for multiple offences
Man holds 30cm samurai sword to his own neck during stand-off with police at Boon Lay Drive
Police respond to Stomp: Auntie wields chopper at Serangoon neighbour over noise, gets tasered
More About:
police
stand-off
theft
stealing