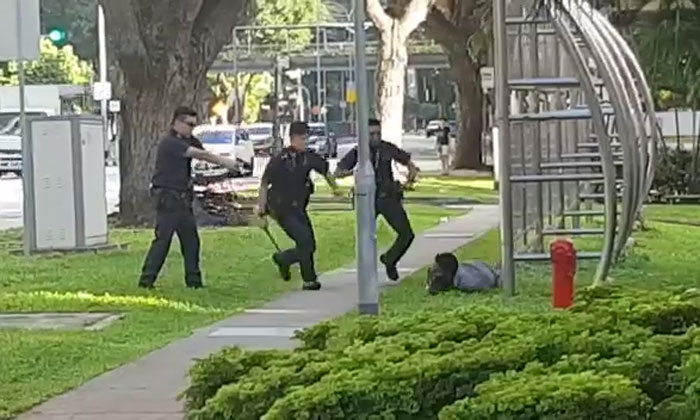 The police confirmed with Stomp that a 25-year-old man was arrested for vandalism, causing annoyance while drunk in a public place and using criminal force to deter a public servant from discharging of his duty near Everton Park on Sunday afternoon (June 9).

The man was caught on video charging towards a police officer before he was tasered and pinned down by other officers.

In the video circulating online, the man is seen with his shirt unbuttoned and holding a drink can in his left hand.

He is heard shouting at two officers while taking sips from the can. It is unclear what he is saying.

When two other officers join their colleagues at the scene, the man is seen charging at one of them.

The officer immediately withdraws his baton while his colleague takes out a taser gun.

The officer the man charged at hits the man on the legs with a baton and tells him to "get down".

The man does not budge.

A shot from the taser is heard before the man is seen falling to the ground.

In response to a Stomp media query, the police said it received multiple '999' calls for assistance of a man who was damaging public property and causing disturbance to members of the public near Everton Park at about 4.45pm.

"When the police officers were engaging the 25-year-old man, he suddenly charged towards the officers," a police spokesman said.

"The man was subsequently arrested for vandalism, causing annoyance while drunk in a public place and using criminal force to deter a public servant from discharging of his duty.

"The man currently has pending court proceedings for committing robbery with hurt and he was out on court bail at the time of incident.