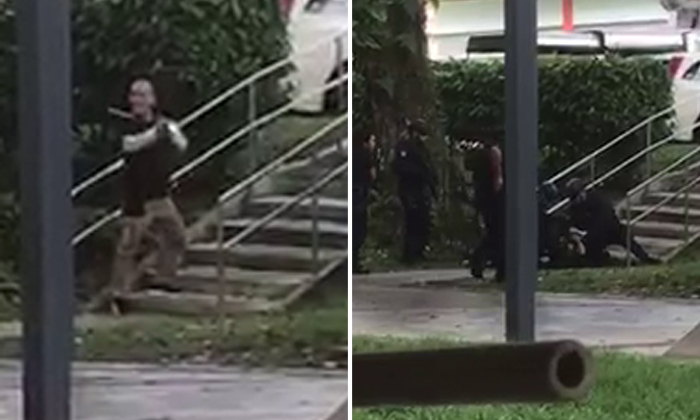 A 52-year-old man wielding a samurai sword was arrested after a 30-minute stand-off with the police at Block 191 Boon Lay Drive on Tuesday (Jan 1).

Responding to a Stomp query, the police said they received a call for assistance at 5.18pm.

The man was arrested for possession of an offensive weapon and suspected drug-related offences.

Stomper Anonymous alerted Stomp to a video of the incident that has been circulating online, showing the man holding a blade to his own neck while shouting at police officers.

According Lianhe Wanbao, the blade was a 30cm samurai sword.

In the video. one officer can be seen holding a riot shield.

Despite being told by officers to put his weapon down, the man does not do so. He is eventually pinned down and disarmed by the police.

Stomp understands that officers had to physically restrain the man as he did not comply with orders to lay down his weapon.

The man was unhurt and no other injuries were reported.

A 59-year-old resident in the area, Ahmad, told Wanbao that he had heard a loud noise outside his flat and looked out.

He said: "The man was holding the blade to his neck the whole time and looked very agitated. I was afraid that he might hurt himself. It was so scary!"

Related Stories
Police respond to Stomp: Auntie wields chopper at Serangoon neighbour over noise, gets tasered
Man flees during police check and struggles when pinned down, arrested for drug-related offences
Man arrested for armed robbery and possession of weapons after standoff with officers at Woodlands Checkpoint
More About:
stand-off
arrest
police
drugs