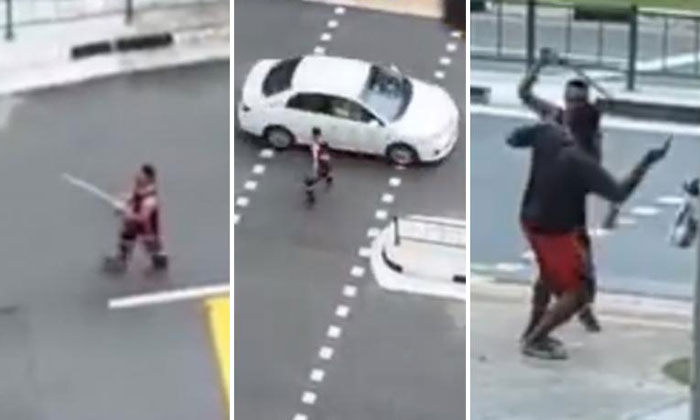 A man has been arrested for criminal intimidation and possession of an offensive weapon on Monday (March 14).

The police said in a statement that at about 1.55pm on Monday they responded to a call for assistance regarding a man wielding a sword near Buangkok Square mall.

The man had allegedly swung the sword towards members of the public and damaged at least three cars at the location, the statement added.

He was detained by five members of the public before being arrested by police officers who responded to the call.

The man and two members of the public sustained minor injuries.

The police said that the sword was seized as a case exhibit and that investigations are ongoing.

In videos shared on social media, the man can be seen walking along the road while holding the sword.

As cars pass by, the man swings his sword towards the vehicles.

While walking towards a pedestrian crossing, the man rushes forward to attack a passer-by and slips, falling on the floor. The passer-by pins him down and subdues the man with the help of several others.

Related Stories
Knife-wielding youth tried to rob man of $50k after pretending to have watch for sale
Woman jailed for biting auxiliary police officers, wielding a chopper in public and taking drugs
Man, 62, slashes son, 25, with kitchen knife after argument in at Serangoon home
More About:
weapon
arrested
damaged
injured