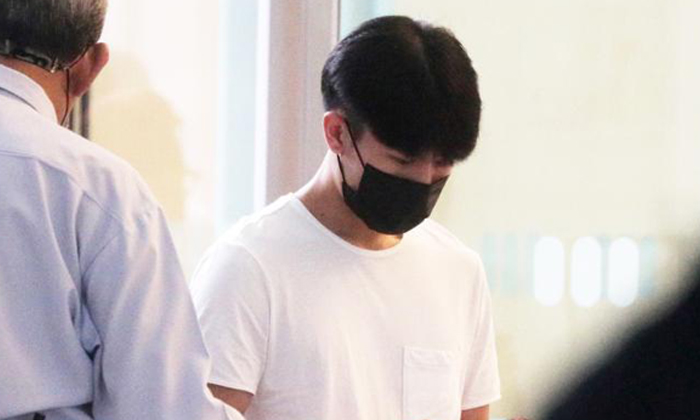 A youth in July last year pointed a penknife at a man carrying a bag containing $50,000 in cash and told the latter to hand it over.

Terry Tong Hong Zhi, 20, swung the weapon when the Vietnamese victim, Mr Nguyen Thanh Luan, refused to comply, leaving Mr Luan with a cut on the left side of his face that needed stitches.

Tong then fled the scene empty-handed but was arrested by the police two days later.

On Thursday (March 10), the Singaporean youth admitted to attempted robbery.

The court heard that Tong, who had a gambling habit, had been saddled with a debt of about $40,000.

In a bid to pay his creditors, he hatched a plan to commit robbery by pretending to have a luxury watch for sale and luring potential victims to Gerald Drive, near Yio Chu Kang Road.

Deputy Public Prosecutor Eugene Lau said: "To avoid being caught, he purchased a subscriber identity module card (SIM card) through what he termed the 'black market' and installed it in his sister's spare cellphone. He used the cellphone to create Carousell accounts under multiple monikers.

"To convince potential buyers that he was a genuine seller, he set as his profile pictures an image he found online of a middle-aged Chinese male."

Tong then lied on Carousell that he had a Patek Philippe watch for sale at a lower price than what other sellers were asking for on the online marketplace.

He then chatted with potential buyers, telling them to meet him in Gerald Drive, which he had picked as it is quiet at night.

Moreover, the area is a private housing estate, which he felt could convince potential buyers that he was a genuine seller.

The prosecutor added: "He would observe them from a distance to decide whether to rob them. For a time, he decided against robbing the potential buyers who went to Gerald Drive: The first potential buyer came with a friend; a few others, mistakenly assuming that the accused resided in the property on Gerald Drive, rang the doorbell and interacted with the property's owners."

Mr Luan then prepared $100,000 in cash, which he separated into two bags before he went there at around 10pm that day.

He was carrying one of the bags when a knife-wielding Tong approached him. The youth fled the scene when his robbery attempt failed.

He threw away the SIM card and reset his sister's mobile phone. The police arrested Tong on July 15 last year.

On Thursday, the court called for a report to assess Tong's suitability for reformative training. He will be sentenced at a later date.

Offenders ordered to undergo reformative training are detained in a centre and made to follow a strict regimen that includes foot drills and counselling.

Related Stories
Man arrested for armed robbery involving about $35,000 in cash and jewellery
Man, 81, falls down and suffers head lacerations after robber, 64, pulls gold chain from his neck
Man slashed by armed 20-year-old youth who tried to rob him of $100k cash in Buangkok
More About:
robbery
weapon
violent
court
Carousell
attack