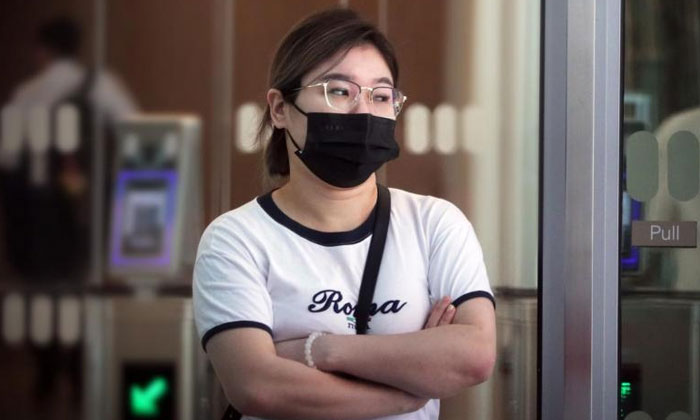 Upset with auxiliary police officers for waking her up while she was held in a cell, a woman bit two of them and resisted their efforts to restrain her.

Gladys Li Wen Jing, 27, was also convicted of wielding a chopper in public after arguing with her boyfriend.

On Thursday (Feb 17), Li was sentenced to jail for three years and 11 months.

The Singaporean had pleaded guilty to two counts of voluntarily causing hurt to a public servant and a count each of possessing an offensive weapon in public and consuming methamphetamine.

The court heard that Li was arrested and placed in a cell at Woodlands Police Division in March 2021 on suspicion of affray.

Affray is committed when two or more people disturb the public peace by fighting in a public place.

At around 11.45pm, Li began shouting and kicking the door of her cell repeatedly, as she was angry with auxiliary police officers for waking her up.

She called one of the officers a "dog" and refused to cooperate when told to wear a mask.

When another officer tried to handcuff her, Li swiped the officer's face, causing her glasses and face shield to come off.

During the 10 minutes of violent struggling, Li bit two officers and scratched one of them.

The first victim suffered bruises and scratches while the second was left with a cut and bite mark. The two officers were each given two days' medical leave.

Earlier in September 2020, Li took a chopper from her flat in Bukit Merah to a carpark to look for her boyfriend. She had been arguing with him and wanted to scare him.

A resident spotted her with the chopper and called the police. Li threw the weapon away when she saw police officers approaching her, but they arrested her nonetheless.

When Li was arrested again in November 2020, her urine samples were found to contain methamphetamine, a Class A controlled drug.

She had previously been admitted to a drug rehabilitation centre in 2014 after she was found to have consumed the same drug.

For voluntarily causing hurt to a public servant, Li could have been jailed for up to five years and fined.

For consuming methamphetamine, she could have been jailed for up to 10 years and fined.

For possessing an offensive weapon in public, she could have been jailed for up to three years.