Man who spat at woman on bus, made xenophobic slur about Covid-19 virus gets jail 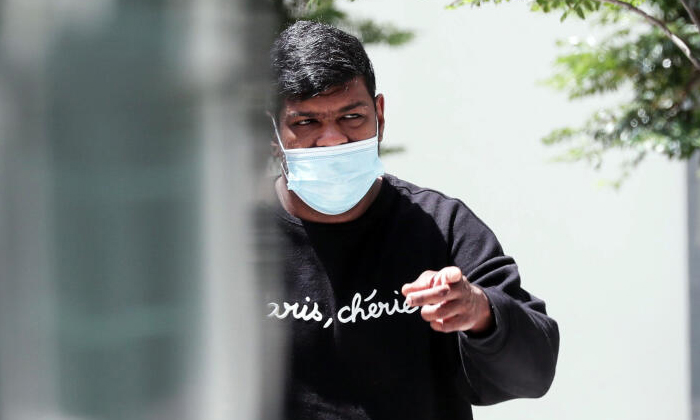 A man who spat at and made a xenophobic slur towards his victim about the Covid-19 virus was jailed for four months and three weeks on Friday (June 4).

Raymond Joshua, 33, pleaded guilty to one count each of harassment and using criminal force, as well as an unrelated charge of failing to report for a urine test in February last year.

Three other charges - two of failing to report for a urine test and one of not wearing his mask over his nose and mouth at all times while outside his place of residence - were taken into consideration by District Judge Eugene Teo for sentencing.

The incident occurred on an SBS Transit bus on the night of July 2 last year.

At about 9.30pm, the 36-year-old victim and her mother boarded the bus from the stop opposite Sengkang General Hospital.

Joshua, who was already on the bus, later spoke to the victim on multiple occasions while gesturing with his hand.

Another passenger overheard him saying the word "smelly" in Mandarin to the victim and her mother, court documents state.

At about 9.45pm, Joshua gestured with his hand again and uttered a xenophobic slur, blaming Chinese nationals for spreading Covid-19. The victim is a Singapore citizen.

The court heard that Joshua then hurled vulgarities at the victim and stood very close to her. When she pushed him away, he removed his mask and spat at her face.

A police report was subsequently made and Joshua was arrested at about 10.45pm that day. The court heard that he had drunk alcohol before boarding the bus.

The incident was captured on the bus' closed-circuit television footage, and a clip was played in court.

On Friday, Joshua pleaded for leniency and asked for his jail term to be deferred for two to three weeks to allow him to settle his personal affairs.

But District Judge Teo dismissed his request, noting that his case had been in the court system since May last year and had been adjourned numerous times.

The judge said the Covid-19 pandemic has resulted in measures being taken by "all of us".

"Sometimes it can be stressful, but they are all important measures and we must all do our part," he added. "(The) important thing is to not respond to those stresses with irrational hate - that benefits no one."

For his offence of using criminal force on the victim by spitting at her, Joshua could have been jailed for up to three months, fined up to $1,500, or both.

He could also have been jailed for up to six months, or fined up to $5,000, or both, for his harassment offence.

For his offence of failing to report for a urine test, Joshua could have been jailed for up to four years or fined up to $10,000, or both.