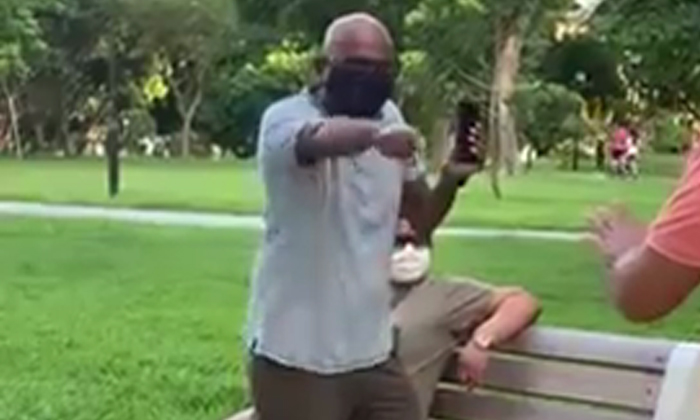 A man is under investigation for public nuisance and uttering words with deliberate intent to wound the racial feelings of others, said the police on Thursday (May 13).

This was in relation to an incident at Pasir Ris Beach Park on May 2. The man, 47, had allegedly uttered offensive remarks towards an Indian family and confronted a male member of the family for not wearing his mask at about 6pm, the police said in a statement.

A video of the incident sent to Mothership last week had shown a man shouting at another person, telling him not to "come and spread the virus".

The first man, who appeared to be agitated, also said that the latter was breaking the law by not wearing a mask, although the man responded that he had been drinking water.

A woman, who appeared to be a family member of the man being shouted at, also protested at being called names in the two-minute video.

The police said they take a serious view of acts that have the potential to damage racial harmony in Singapore.

"Any person who makes remarks or takes action that can cause ill will and hostility between the different races or groups will be dealt with swiftly and in accordance with the law," they added.

Another man had been arrested for similar offences recently.

On Tuesday, the police said they arrested a Chinese man, 30, for public nuisance, uttering words with intent to wound the racial feelings of others and voluntarily causing hurt.

This was for an incident on May 7 in Choa Chu Kang Drive where a 55-year-old Indian Singaporean woman who was brisk walking towards Choa Chu Kang Stadium was allegedly kicked by the man and had racial slurs shouted at her for lowering her mask below her nose.

Prime Minister Lee Hsien Loong and other ministers have denounced the attack. PM Lee said in a Facebook post on Monday: "It goes against everything that our multiracial society stands for, and the mutual respect and racial harmony that we hold so dear."

Minister for Home Affairs and Law K. Shanmugam also addressed the issue in Parliament on Tuesday, saying that the alleged attack appeared to be racist conduct, based on her account of the incident.

The offence of public nuisance under Section 290 of the Penal Code carries a jail term of up to three months, a fine of up to $2,000, or both.

The offence of uttering words with deliberate intent to wound the racial feelings of any person under the Penal Code carries an imprisonment term of up to three years, a fine of up to $5,000, or both.