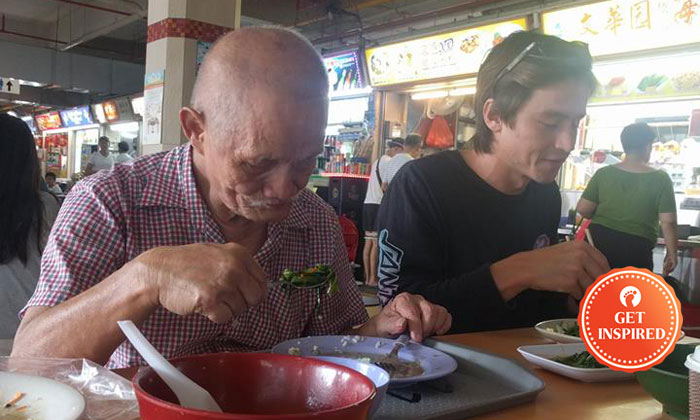 How often do we see elderly people eating alone at eateries and hawker centres? And how often do we actually reach out and offer to share our food with them?

Facebook user Catherine Leck was heartened to see a man offer to share his vegetables with an uncle sitting next to him at Old Airport Hawker Centre on Sunday (Jan 28).

The man and his fiancée sat down with chicken rice at the same table as Catherine and an elderly man.

"After the uncle was done with his meal, he went on some random blabbering; talking into the thin air.

"Now, most people would have ignored him, thinking he must be 'sot' or what, but the guy acknowledged him and then asked, 'Would you like to try some of my vegetables?'

"The uncle then gestured and pointed to his emptied plate, his fingers all stained with the leftover zhup.

"I couldn't really figure out what he wanted, but the guy followed up with, 'Oh, would you like me to pour them onto the plate for you? I will be happy to share.'

"He then passed a large portion of his side dish onto the uncle's plate."

Catherine managed to take a photo of the act, wanting to share the kind gesture.

"By now, my heart was smiling from within.

"After the uncle had finished, he waved his hands a bit and the guy said, "Oh, was it too hot? I am so sorry for the chilli inside.." (as if it was his fault, but I knew he completely made the uncle's day, he also made my day, so good to witness such an act!)"

When the uncle left the table, Catherine told the couple how kind she thought they were.

From their short conversation, she found out that they had just moved to Singapore from Melbourne and that the man was looking for work related to diving or videography.

Wanting to pass on the act of kindness she witnessed, Catherine hopes to highlight the man's kind deed and wants to do something for him in return.

She hopes her post will be shared and that it will reach companies looking for people in the man's interested fields and created an email for this purpose: thankyouforbeingkindtosg@gmail.com