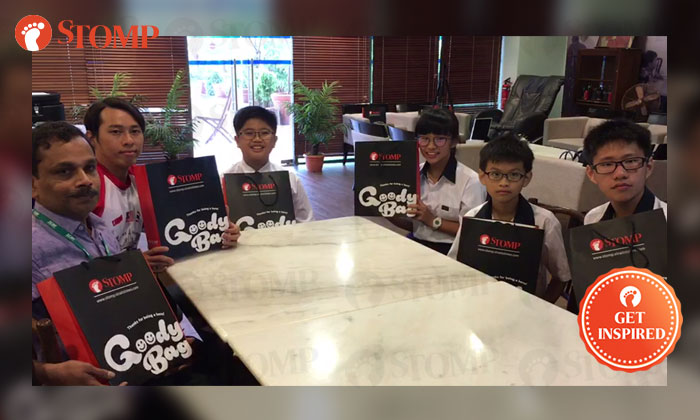 The public-spirited individuals had rushed to help a nine-year-old boy who was trapped under a car in an accident at Geylang East Avenue 1 on Jan 18.

They came to the boy's aid and attempted to lift the car to free him.

Eyewitnesses said that they managed to free the boy within five minutes.

After the incident, SCDF reached out on Facebook to find the good Samaritans.

Of the seven that were identified and invited to the award presentation today, four were found with the help of Stomp after pushing the appeal on social media including Facebook, Twitter and WhatsApp.

The other two people identified by SCDF are Govindan Meyyappan, 49 and Huang Han Xiang, 29 - both technicians. One other recipient, Wong Kit Soe, could not attend the ceremony.

When asked what they felt about people commending them for what they did, Geylang Methodist Secondary School student, Jose said:

"Of course we felt proud and also happy for getting this Goody Bag thanks to Stomp.

"I really encourage other people to think and help other people because Singapore is a very small country and with a big population so surely, there are other people who need help."

Govindan Meyyappan added that he felt the appreciation event was "good motivation to other people to help each other out".

Branson, who is from Maris Stella High School, quoted a Chinese verse that translated to: "After helping (somebody else), you'll feel very happy."