Man who scolded McDonald's staff: "They slammed the table for payment, I was not wrong" 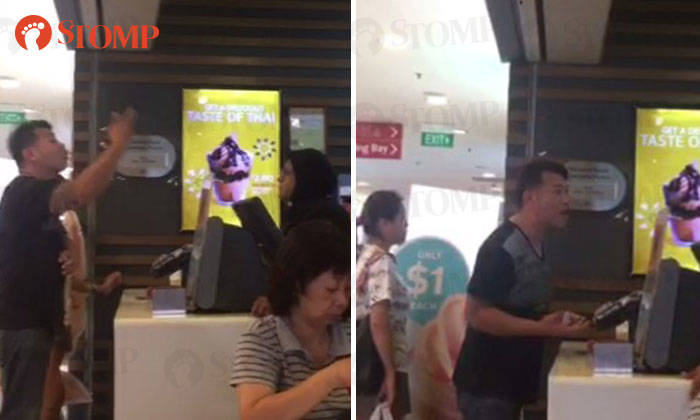 A man who hurled vulgarities at McDonald’s employees in Hougang Mall says that he was not wrong in doing so, and he had only reacted after an attendant slammed the table while asking for payment.

The altercation was witnessed by Stomper Caren, who took a video that she sent to Stomp.

Despite repeated apologies by an employee, the enraged man is heard shouting in the viral video:

“You don't tell me sorry because I’m very angry.

"What! I haven’t order finish. Money, money, money. What is this?"

At one point, he takes out some bills and slams them on the counter, yelling:

"What? My face, I got no money to pay for this ice cream?

In response to the incident, McDonald’s said in an official statement that its employees do not deserve to be shouted at.

Since then, netizens have uncovered the identity of the man and found that he also allegedly evaded payments to a car rental company and an e-commerce site.

The man told Shin Min Daily News that on the day of the incident, one of the employees had slammed the table multiple times to ask for payment even when his wife was not yet done placing her orders.

The disrespectful act caused him to become infuriated.

“The netizens only posted the second part of the video and did not mention the previous part.

“This is unfair to me. Moreover, I was scolding the manager then, not the employee.

“At that time, it was the manager who said that she would take action against me, which caused me to lose control.”

The man added that although the video has gone viral, he does not intend to apologise to the employees, and thinks he has done no wrong.

His wife also supported her husband, saying that he was not wrong.

Related Stories
Man hurls vulgarities at Hougang Mall McDonald’s employees: "I got no money to pay the ice cream? F***!"
McDonald’s responds to video of man raging at employees: Employees do not deserve to be shouted at
Man lashes at McDonald's employees: Reader says man's behaviour was uncouth and unnecessary
More About:
argument
dispute
McDonald's