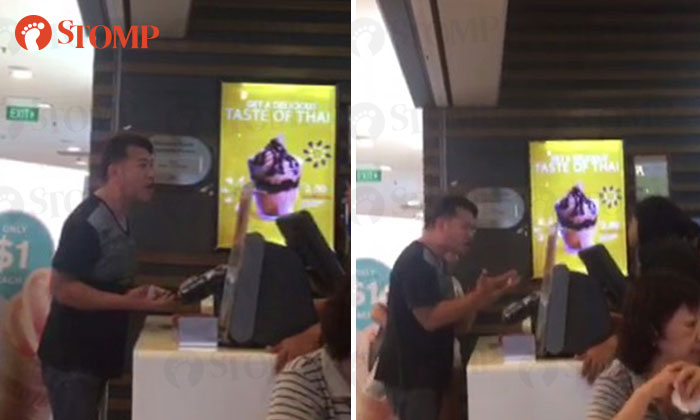 Several readers have written to Stomp in response to the article about a man lashing at McDonald’s employees manning a Dessert Kiosk at Hougang Mall.

In a video shot by Stomper Caren, a man becomes increasingly agitated after he accuses an employee of soliciting payment even before he finishes placing orders.

The situation escalates further as the man launches into a tirade.

“What! I haven’t order finish. Money, money, money. What is this?”

Later he takes out money form his wallet and slams it on the counter, adding:

“What? My face, I got no money to pay for this ice cream?

McDonald's has since issued an official statement, saying that its employees do not deserve to be shouted at.

With regard to the man’s belligerent behaviour and accusatory tone, Stomper YS from Malaysia said that he too has his fair share of when dealing with staff taking orders at fast-food restaurants.

For YS, the problem usually stems from the employee’s poor command of English.

As such these employees may not understand common words or phrases.

However, YS said that he would simply avoid patronising the same outlet rather than creating a scene.

“The customer in Singapore was upset over being asked to make payment before he has finished his order and brushed aside the apology from another staff by rudely asking whether she is the manager.

“He then insisted on talking to a higher authority and demanded to see the manager, all the while showing uncouth behaviour.

“Although he may think greatly of himself, he does not realise that he lacks true confidence, being easily slighted by others. The fact is, no one can make him angry if he does not allow it.”

YS also encouraged other methods for dealing with the frustration.

“The natural response is to react with anger when someone is angry with us. Instead, we should try to diffuse the situation by laughing it off apologetically, regardless of who was right or wrong.

“More often than not, it was over a trivial matter and not worth the trouble to harbour ill feelings, which would make us grow old and bitter if allowed to accumulate over time.

“But is the customer always right? The last time I conducted training for 60 adults, their answers were either yes, no or yes and no.

“I pointed out that no human being is perfect and therefore no one, including customers, can always be right. But if we value the business, we must treat the customer as if he is right even when he was in the wrong.

“Also, one can never win an argument with a customer, who would react rashly when overcome by emotions and not in the right frame of mind to reason or think logically.

“But angry people could be rationale after calming down hours or days later and would appreciate you for not making him lose face. Some may end up as your most loyal customers.

“The staff and manager at McDonald’s were very accommodating to the angry customer. Lucky for him, he did not try the same antic at a night spot in a developing country, as the lesson could be too painful.

“McDonald’s issued a statement that its employees should be treated with respect. But only those who truly respect themselves are capable of respecting others.

“For most businesses, around 20 percent of the customers are not worth keeping. So, companies should not bend backward to please all its customers but should not offend any.

“And there is no need to put up a sign stating, “We reserve the right to refuse service to anyone”.

“Decades ago, I spotted one of these signs in a fried noodle restaurant located at Jalan Ampang near Jalan Gereja in Kuala Lumpur.

“Once, the aloof owner gave me a flat no and turned away after I ordered a stout. It was the only time I was ever refused service anywhere.

“His small restaurant was usually packed at lunch time and he must have assumed I will be occupying a seat drinking and displacing others for lunch.

“But I continued to patronise the restaurant by placing my order for noodle first before asking for a stout. The Hokkien Char was worth the wait but now all that is left are the memories, as the restaurant is long gone, along with many traditional businesses in the old city centre.”

Another reader, Stomper Desmond also weighed in on the issue.

“I agree with McDonald’s stand that no employees deserve to be treated this way, but where is the manager? Also, what is the standard operating procedure (SOP) for an incident such as this?”

Related Stories
McDonald’s responds to video of man raging at employees: Employees do not deserve to be shouted at
Man hurls vulgarities at Hougang Mall McDonald’s employees: "I got no money to pay the ice cream? F***!"
Fight breaks out at launch of Adidas-Pharrell Williams collection at Pacific Plaza
More About:
argue
dispute
customer service
McDonald's