Man hurls vulgarities at Hougang Mall McDonald’s employees: "I got no money to pay the ice cream? F***!" 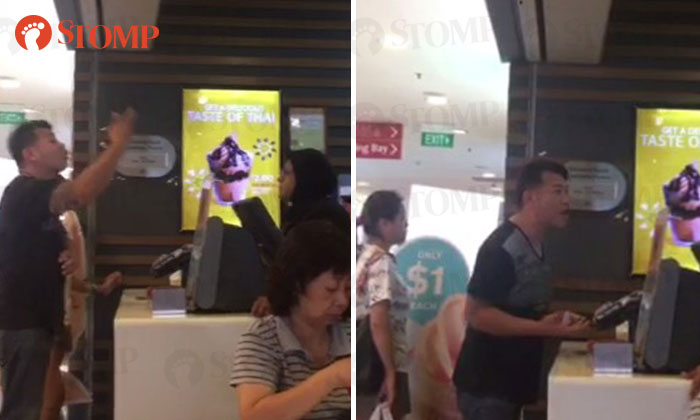 A man flew into a rage, shouting at employees manning a McDonald’s Dessert Kiosk in Hougang Mall on Thursday (March 16) between 3pm and 4pm.

Stomper Caren who was working nearby went to investigate when she heard the shoutings.

She took a video of the incident and sent it to Stomp.

In the video, the man in a black shirt could be heard yelling at the employees after one of them allegedly asked him for payment before he finished ordering.

Shouted the infuriated man: "What service is this? You tell me! Is the McDonald’s service like this?"

Despite an employee apologising to him, the man could not be pacified.

He replied: "You don't tell me sorry because I’m very angry.

"What! I haven’t order finish. Money, money, money. What is this?"

The employee explained that her colleague had been addressing another customer, but the man rebuked her claims, citing that there were no other customers aside from him and his companions -- a woman and a little girl.

He continued demanding for an explanation, and the employee told him that she would talk to the employee who had attended to him.

Clearly unsatisfied with her reply, the man told her off, saying that he wanted action to be taken against said employee.

He also demanded to see the restaurant manager.

Amidst his tirade, his female companion recounted the sequence of events to the employee.

The man then took out some bills and slammed the money on the counter.

"What? My face, I got no money to pay for this ice cream?

The first employee replied that the entire incident was a misunderstanding, and reassured the man that the restaurant manager would call him at a later time.

At this point, another employee handed his female companion an ice cream cone which she passed to the man.

The man, however, slammed the cone back on the counter as he hurled vulgarities.

His female companion received two more ice cream cones, one of which she handed over to the little girl.

Meanwhile, the first employee explained to the man that her colleague had been teaching another a new employee as it was her first day.

The man and his companions subsequently walked off with their ice cream.

Said Caren after witnessing the incident: "The man was very, very rude.

"I can understand why he became angry if it's the employee's fault, but making a scene in public is just wrong.

"Either get the ice cream and go off or don't buy it.

"Moreover, he did it in front of his wife and child.

"I think after he yelled so loud and everyone started looking at him, he must have felt like he needed to 'show off' so he became even angrier."

Related Stories
Fight breaks out at launch of Adidas-Pharrell Williams collection at Pacific Plaza
Man calls fellow commuter 'lowly dog' for 'snatching' his seat on train
Drivers go berserk and attack each other at Chinatown Point carpark, one even gets thrown down onto ground
More About:
argument
dispute
McDonald's