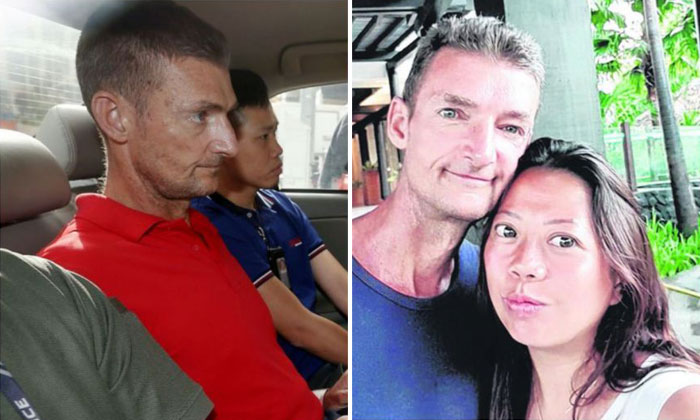 Believing that his wife was a demon who had to be banished back to the abyss, a man who suffered a relapse of schizophrenia repeatedly hit her with martial arts sticks and stabbed her neck.

Australian Paul Leslie Quirk, 49, had heard voices prompting him to kill his Singaporean wife Christina Khoo Gek Hwa. He had also seen a passer-by wearing a marathon "finisher" T-shirt, which his mind interpreted as “finish her”.

After killing Madam Khoo, 43, in their Sengkang condominium, Quirk, who was a podiatrist at Punggol Polyclinic, stabbed the family's 10-month-old poodle and threw it out of their home's third-floor balcony.

Quirk, who was in Singapore on a long-term visit pass, believed that the dog was a familiar - a spirit companion - that "could have brought the demon back to life".

When the police arrived, he answered the door covered in blood, and told the officers that he was "Jesus Christ".

On Monday (May 24), he was sentenced to 10 years' jail by the High Court after he pleaded guilty to a charge of culpable homicide.

The charge was reduced from murder, as his psychiatric condition was assessed to have substantially impaired his mental responsibility for his acts.

Another charge, of mischief for killing the dog, was taken into consideration.

The court heard that Quirk suffered a relapse because he reduced his intake of his prescribed medication about four months before he killed Madam Khoo on Jan 3 last year at Esparina Residences.

He moved from Australia to Singapore in 2016 and married her in August 2017. He also adopted her son from her first marriage.

Madam Khoo's LinkedIn profile indicated that she was a director and consultant at a management consulting firm based in Burlington, Massachusetts. She was believed to have worked for the company in Singapore.

The couple had occasional arguments about the alimony that Quirk owed his former wife in Australia, Deputy Public Prosecutor (DPP) Andre Chong told the court.

Quirk was first diagnosed with depression after his divorce in 2001.

In 2005, he started to experience auditory and visual hallucinations and believed that he needed to save the world by dying. This led to two episodes of self-harm that resulted in him being admitted to psychiatric units.

He achieved full remission after he was switched to an antipsychotic medication but suffered relapses when he stopped taking it. 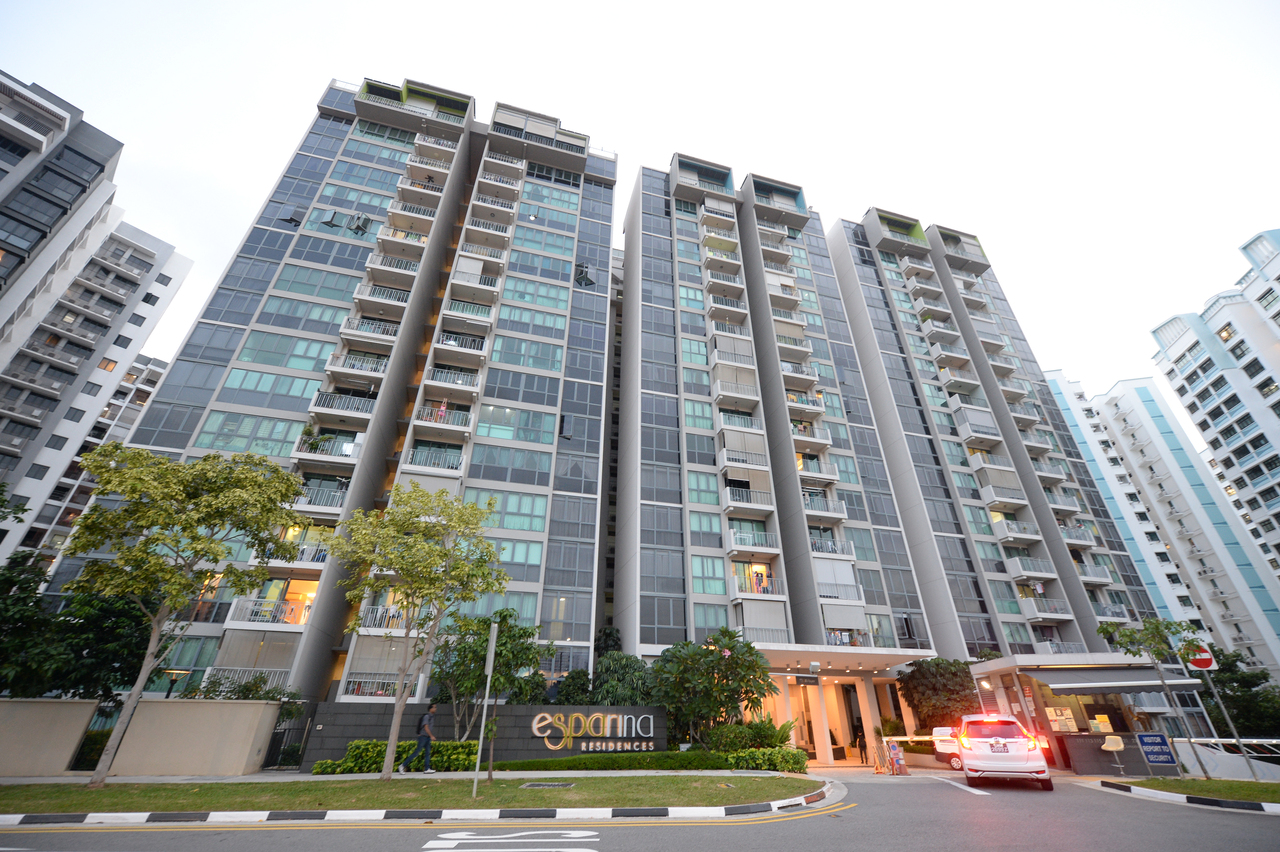 The court heard that Quirk suffered a relapse because he reduced his intake of his prescribed medication about four months before he killed Madam Khoo on Jan 3 last year at Esparina Residences. PHOTO: SHIN MIN DAILY NEWS

After he moved to Singapore, he saw a psychiatrist and was prescribed the same medication.

However, in August 2019, he began taking the medication once every two to three days or more, instead of once a day.

On the night of Jan 2 last year, the couple had an argument at home, which led to Quirk packing his bag and leaving for 17 Punggol Residences, where his family, visiting from Australia, was staying.

He told his brother that he felt pressured to stay in the relationship.

He was advised to stay in the marriage and returned home in the wee hours the next day, accompanied by his brother.

That morning, the couple left the unit, and were seen holding hands when they parted ways with Quirk's brother.

The couple headed to the nearby Catholic Spirituality Centre, where Quirk heard a voice telling him that he had "a chance to stop this from getting worse".

He continued hearing voices when they headed home. The voices told him that Madam Khoo was evil, and that staying with her would upset the order of things.

At about 11.50am, Quirk grabbed sticks that the family used for kali, a form of martial arts.

Without warning, he began hitting Madam Khoo, causing her to run to the balcony and scream for help.

Quirk shouted "you die, you die" as he continued to hit her on the back of her head. 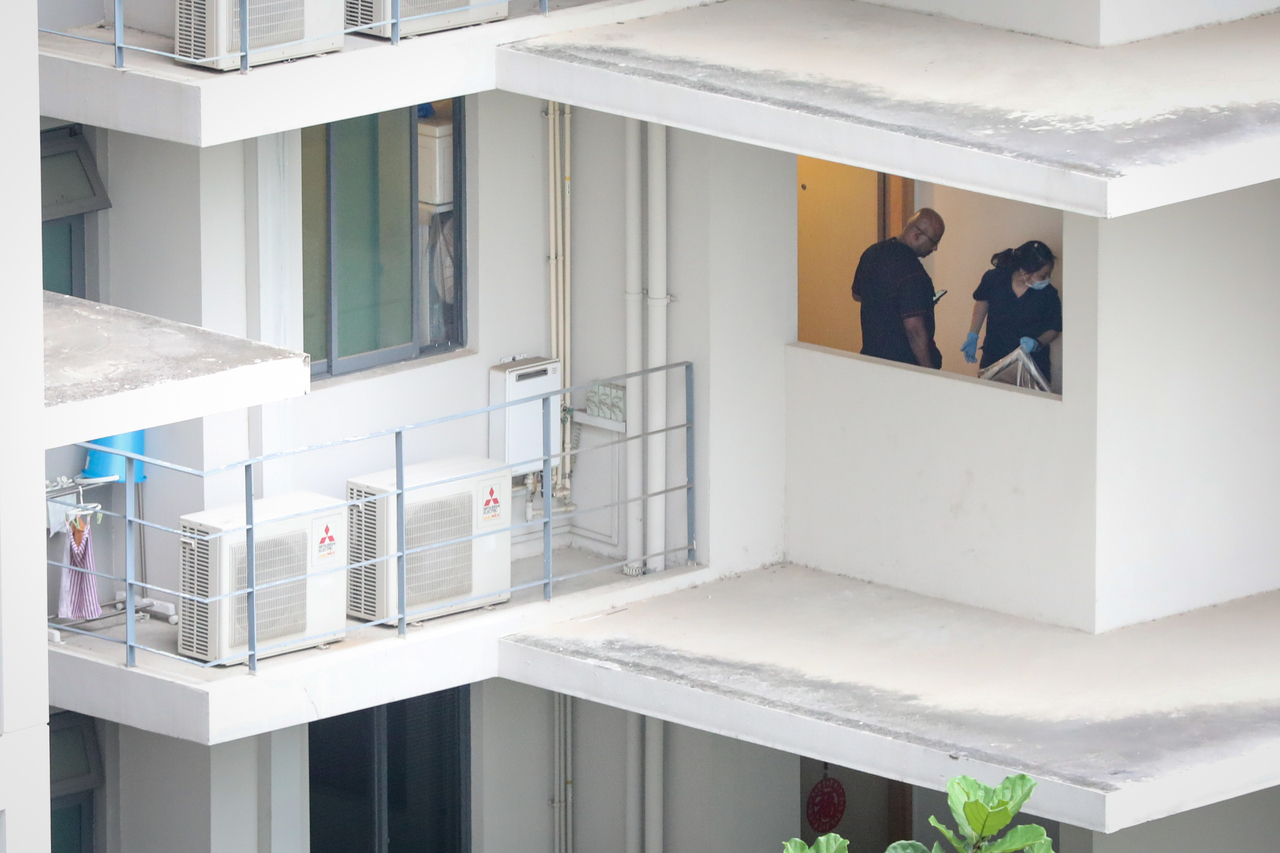 Police investigators were seen in the third-floor unit at Esparina Residences where Madam Khoo was found dead on Jan 3, 2020. PHOTO: ST FILE

Several neighbours witnessed the assault and called the police.

The attack continued when Madam Khoo fled to the master bedroom.

When she collapsed, Quirk retrieved a knife from the kitchen and repeatedly stabbed her neck.

After killing the dog, he sent a text message to his brother, stating "it is done".

The DPP sought at least 10 years' jail for Quirk, arguing this will ensure his compliance with taking his medication.

Defence counsel Anand Nalachandran asked for a jail term of not more than six or seven years. He said his client is likely to be repatriated after he is released from prison and that his parents and brother will ensure he is properly treated.