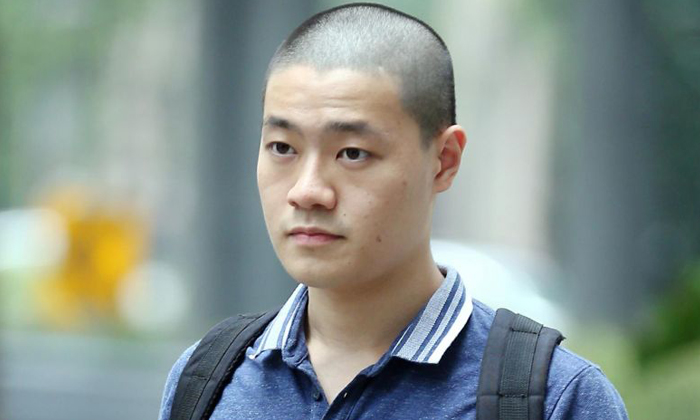 A Singaporean man, who was born here in 1996 but left for Hong Kong the following year, decided to continue his studies at England's Lancaster University even though the Central Manpower Base (CMPB) had rejected his request for a deferment.

After defaulting on his national service obligations for four years, eight months and 30 days, Jonathan Lee Han Wen, 22, returned to Singapore on Sept 3 last year and enlisted a month later.

Lee, who is now serving his full-time NS with the Singapore Armed Forces, was sentenced on Tuesday (Nov 5) to nine weeks' jail after pleading guilty to four charges under the Enlistment Act.

He was not in possession of a valid exit permit between 2013 and last year, the court heard.

Deputy Public Prosecutor Gabriel Lim said that Lee's mother, Ms Lim Kim Lian, is a Singaporean while his father is a British citizen and a Hong Kong permanent resident.

Lee and his family had left for Hong Kong on Jan 19, 1997. He was aware of his NS obligations in Singapore even when he was still in primary school.

DPP Lim said: "The accused understands from Ms Lim that the latter chose to give birth to him in Singapore. At that time, the sovereignty over the (Hong Kong Special Administrative Region) was about to be transferred to the People's Republic of China.

"Hence, Ms Lim desired for the accused to have a Singapore citizenship which allows him to return to Singapore as a place of relative stability."

The DPP added that Lee became subject to the Enlistment Act on June 17, 2013, when he turned 16½ years old. He then registered for NS about two months later.

Between Aug 26 and Sept 12 that year, Ms Lim corresponded by e-mail with the CMPB for a renewal of her son's exit permit.

The DPP said: "Ms Lim was informed of the need for a bond, in the form of a bank guarantee or deed, to the amount of $75,000 to be furnished before such EP (exit permit) can be issued.

"The return date of the deed was extended multiple times for Ms Lim or the accused's family to furnish the bond. Such bond was not furnished. A valid EP was accordingly not issued."

On her son's behalf, Ms Lim also applied several times for NS deferment, pending a renunciation of his Singapore citizenship.

The applications were rejected, with the CMPB explaining to her that male Singapore citizens have to fulfil their full-time NS obligations before requests to renounce their citizenship can be considered.

Lee went to Lancaster University for his foundation course, which started in September 2014, and he sent an e-mail to the CMPB about a year later to ask for a deferment.

Even though it rejected his request, he decided to return to Singapore to serve his NS only after completing his studies.

He obtained his bachelor's degree on July 10 last year and returned to Singapore about two months later. He reported to the CMPB on Sept 4 last year and finally enlisted the following month.

In his mitigation, defence lawyer Ashwin Ganapathy told District Judge Hamidah Ibrahim that his client has "little or no links to Singapore".

The lawyer also said that Lee had voluntarily surrendered to the authorities and wishes to return to Hong Kong to "start life afresh".

For each charge under the Act, Lee could have been jailed for up to three years and fined up to $10,000.

In a statement, the Ministry of Defence (Mindef) said it takes a firm stand against those who commit offences under the Enlistment Act. It added that since the High Court set out the sentencing framework for NS defaulters in 2017, 13 defaulters, including Lee, have been sentenced to imprisonment.

“All male Singapore citizens and permanent residents (PRs) have a duty to serve NS and it is important that NS has the support and commitment of all Singaporeans. To achieve this, we have to adhere to the fundamental principles of universality and equity in NS," said Mindef.

It added: “If we allow Singapore Citizens or PRs who are overseas to evade NS or to choose when they want to serve NS, we are not being fair to the vast majority of our national servicemen who serve their country dutifully, and the institution of NS will be undermined.”