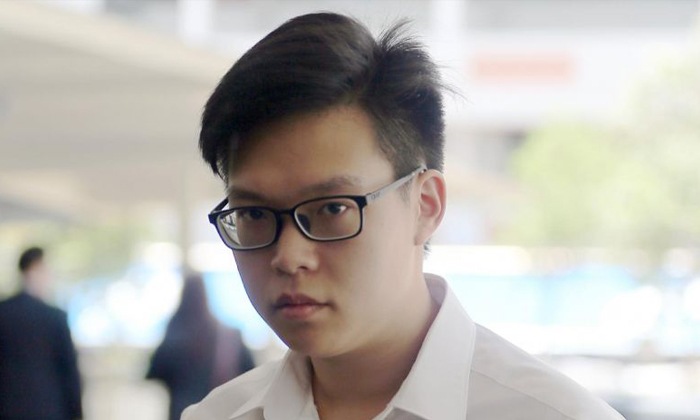 A youth with medical issues was so afraid of sustaining injuries during national service training that he fled Singapore in 2014.

Court documents did not reveal details about his medical issues.

Cheng, 25, was jailed for seven weeks on Monday (Feb 11) after pleading guilty to remaining outside Singapore without a valid exit permit for more than three years - from May 2014 to August 2017.

A separate charge of failing to report for enlistment into full-time NS was considered during sentencing.

The court heard that a notice was mailed to Cheng's Singapore home on April 7, 2014, and he was supposed to report at the Basic Military Training Centre in June that year for enlistment into full-time NS.

When he failed to turn up, an enlistment inspector went to his apartment on June 12, 2014, but realised that no one was home.

The inspector then slipped a notice underneath the front door, asking Cheng to report to the Central Manpower Base the next day.

A police gazette was issued on June 16, 2014, for his arrest when he failed to turn up for the second time, and travel records showed that he had left Singapore in May that year.

"The accused's parents did not know about his initial intention to evade national service as he lied to them by informing (them) that he was going to Brunei for a holiday."

But when Cheng got to Brunei, he confessed to his parents about his intention to evade NS and that he wanted to stay in Australia for good.

He went to Australia soon after.

His mother persuaded him to return to Singapore but he was reluctant to serve NS at that point of time, the court heard.

After obtaining his degree, he decided to return to Singapore in 2017 as his father had been diagnosed with prostate cancer.

Cheng is currently serving his NS with the Singapore Armed Forces after he was enlisted on Jan 26 last year.

The Ministry of Defence had earlier said that it takes a firm stand on those who commit offences under the Enlistment Act.

It added: "It is important that NS has the support and commitment of all Singaporeans. To achieve this, we have to adhere to the fundamental principles of universality and equity in NS.

"If we allow Singapore citizens who are overseas to avoid NS or to choose when they want to serve NS, we are not being fair to the vast majority of our national servicemen who serve their country dutifully, and the institution of NS will be undermined."

In September 2018, Defence Minister Ng Eng Hen said an average of 350 people had defaulted on NS each year over the past 10 years.

They either failed to register or enlist, or did not return to Singapore after their exit permit expired.