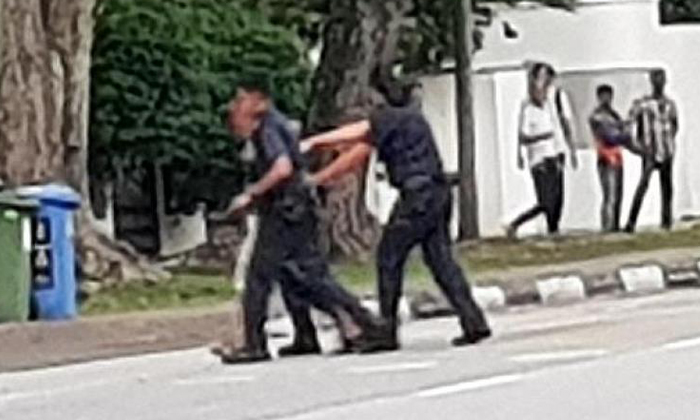 A knife-wielding man was taken down by a Taser after he allegedly charged at a police officer on Monday evening.

The police was alerted to the incident along Mountbatten Road at about 6.15pm and a witness, who declined to be named, told The New Paper yesterday that the man with the knife was walking across the main road as he was being pursued by four officers.

The witness, who was on a bus, said: "I could tell the officers were shouting at him to stop walking away. He looked calm and didn't really show any expression."

The man then changed direction and moved towards one of the officers.

He was then shot with a Taser gun.

The man fell in the middle of the road while still holding the knife, before being disarmed by the officers.

The witness said the man's face was badly bloodied after he fell face first on the road.

During the incident, a police officer diverted traffic.

The police confirmed yesterday a 51-year-old man was arrested along Mountbatten Road for possessing an offensive weapon and a suspected drug-related offence.

Related Stories
Police respond to Stomp: Auntie wields chopper at Serangoon neighbour over noise, gets tasered
2 youths in drunken dispute tasered after charging at police officers in Clarke Quay
Man allegedly tasered after walking around with knife in Woodlands
More About:
arrest
drugs