Man who 'defiantly' flaunted 'having illegal gathering, so what?' slapped with $4,500 fine 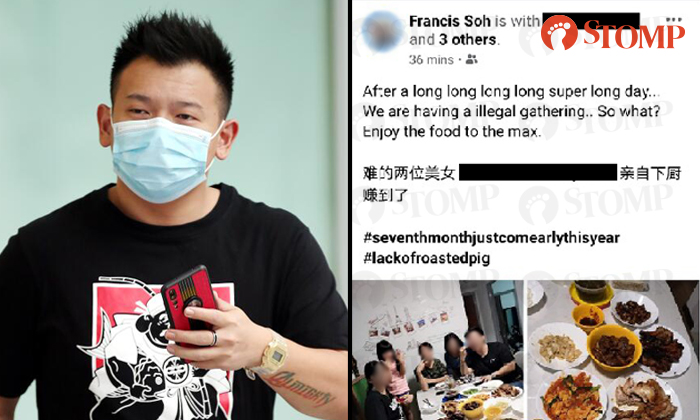 Shaffiq Alkhatib
The Straits Times
May 20, 2020

A man unlawfully went to a family member's flat for dinner during the circuit breaker period, snapped pictures of the gathering and posted them on social media.

Part-time private-hire car driver Francis Soh Seng Chye, 38, also added a caption to the picture, saying:"After a long long long long super long day... we are having (an) illegal gathering... so what? Enjoy the food to the max."

The act, which the prosecution said showed "defiance of authority and disregard for the law", was posted on April 8, a day after social distancing measures were introduced in Singapore.

On Wednesday (May 20), Soh was fined $4,500 after pleading guilty to an offence under the Covid 19 (Temporary Measures) Act.

The court heard a friend of his had spotted the post on Facebook and told citizen journalism website Stomp, which wrote about it. The report attracted public attention.

The incident happened on the evening of April 8.

Deputy Public Prosecutor Kenneth Chin said Soh had met another part-time private-hire car driver, Ms Lye Bao Ru, around 7pm, to hand her the keys to a car they shared.

He accepted her invitation to dinner at her Circuit Road flat which was attended by seven people in all.

He removed the post of the gathering after she asked him to. Court documents did not state if action will be taken against her.

Soh, who was unrepresented, said Ms Lye is his "cousin-in-law" and admitted it was "childish" of him to create the post.

He was one of six people dealt with in court on Wednesday over separate offences related to the Covid-19 outbreak. 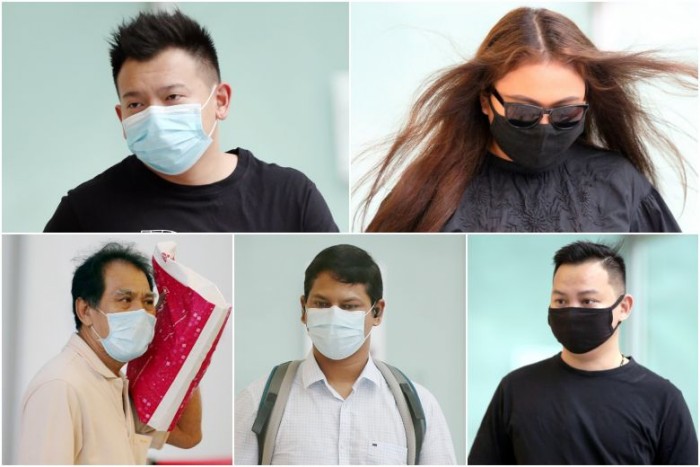 All are Singaporeans, except Vardireddy, who is an Indian national.

Shake, who is jobless, pleaded guilty to one count each of using criminal force on a public servant, failing to wear a face mask over his nose and mouth in public and refusing to give his particulars to a National Environment Agency (NEA) social distancing enforcement officer when approached.

The 41-year-old NEA officer was patrolling near Block 99 Aljunied Crescent around 9.30am on April 22 when he spotted Shake drinking alcohol at the void deck. He was also not wearing a mask.

When told to put on a mask, Shake took one out of his pocket and wore it, covering only his chin.

He also refused to give the officer his particulars when asked and became upset when the younger man took out his mobile phone to record a video of the incident.

Shake pushed his hand that was holding the device, spat onto the floor and left the scene. He was identified after an investigation.

Teo and Foo breached their stay-home notice (SHN) in unrelated incidents. Each was sentenced to four weeks' jail.

Teo arrived at the Singapore Cruise Centre from Batam, Indonesia, on March 20 and was given an SHN. He was required to remain at his Jalan Sultan flat near Beach Road from then until April 3.

He, however, left his home around 1pm on March 29 and went to a nearby coffee shop to buy food which he ate in an open area.

Enforcement officers were at his flat when he returned about 50 minutes later. Investigations found he had unlawfully left his home on four other occasions, between March 23 and 26. He spent nearly five hours in total outdoors on the five occasions, the court heard.

Foo, who is jobless, returned to Singapore from Thailand on March 17. His SHN stated that he had to remain in his Kreta Ayer Road home from then until March 31.

But on March 29, he went out around 4am and took a private-hire vehicle to meet his friend, Mr Lee Quan Hui.

Foo had earlier told investigators he was a guarantor of a $1,000 loan Mr Lee had taken from a loanshark. He claimed the loanshark had contacted him after Mr Lee failed to pay.

He also said he feared for his family's safety and breached his SHN to meet Mr Lee in Sengkang to try and settle the matter.

Vardireddy, who lived in a rented room in a Compassvale Close flat, had come into close contact with a colleague who was tested positive for Covid-19. Court documents did not disclose details of their jobs.

The Director of Medical Services then ordered Vardireddy to be isolated at home from Feb 16 until noon on Feb 25.

He, however, left the flat around 8.10pm on Feb 24 and went to Compass One shopping mall in Sengkang Square to buy a shaver. DPP Regina Lim told the court he needed to shave as he did not want to appear "untidy" when he returned to work the next day.

When he returned home about 25 minutes later, his landlord told him an auxiliary police officer had come earlier to check on him.

Vardireddy, who said he tested negative for Covid-19, was given a $3,500 fine after pleading guilty to an offence under the Infectious Diseases Act.

WENT OUTSIDE TO BUY GROCERIES AND CIGARETTES

Siti, who works as a flight attendant, was fined $4,000 after breaching her SHN.

She returned to Singapore from Brisbane, Australia, around 6pm on March 25 and was ordered to remain in her Woodlands flat from then until April 8.

But on March 30, she left her home around 2.45pm and walked to the nearby Vista Point shopping mall to buy some groceries at a supermarket. She then went to another store to buy cigarettes.

The court heard that enforcement officers were outside her home when she returned about 20 minutes later.

For each charge, offenders convicted of breaching an SHN can be jailed up to six months and fined a maximum of $10,000.