FB user posts about 'having illegal gathering, so what?' after social gathering ban announced 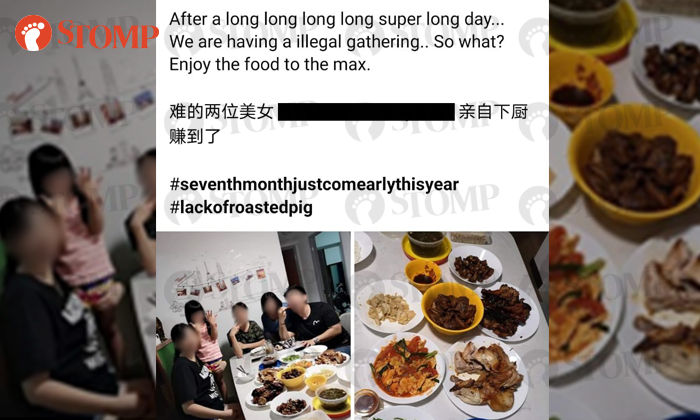 A Facebook user posted about having an "illegal gathering" at home following the announcement of a new law banning social gatherings of any size in both private and public spaces.

The ban, which was announced on Tuesday (Apr 7), includes having private parties or gatherings with families or friends not living together, at home or in public spaces like parks and Housing Board void decks.

Social contact should be confined to immediate family members living in the same household and there should be no social gatherings, said the authorities.

However, individuals can still visit family members for assistance with their daily needs, such as caring for elderly parents or for informal childcare arrangements.

Stomper Tan was concerned to see a man who had posted about having an "illegal gathering" while scrolling through his Facebook feed on Wednesday (Apr 8).

Tan said: "I came across this Facebook post stating on April 8, 'We are having a illegal gathering.. So what?'

"This means they are aware of the new law banning all gatherings with family and friends who do not live together during the circuit breaker period, yet they still do it and post on Facebook."

In the Facebook post that tagged four other users, the man wrote about having the "illegal gathering" after a "long long long long super long day" and "enjoy(ing) the food to the max".

He also said: "Rare that these two beautiful ladies did the cooking, what a gain."

The post was accompanied by photos of food and a picture showing five people, including a child, gathered around a dining table.

It is unclear if they belong to the same household, but all four users tagged in the Facebook post and the man have different surnames.

Stomper Tan added: "They know that it's an illegal gathering but they don't seem to care, which I think is very socially irresponsible."