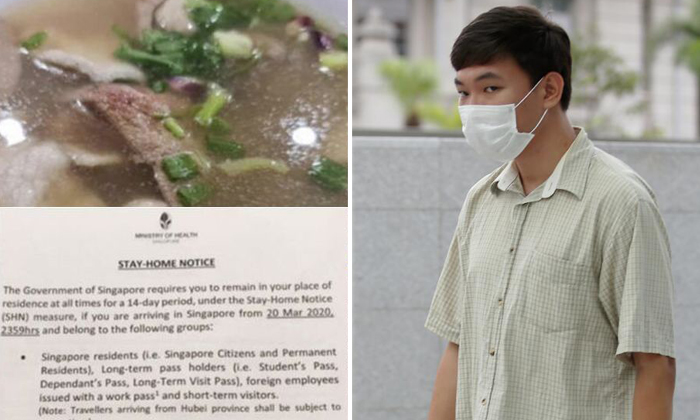 A man who breached a stay-home notice (SHN) and travelled out of his home to eat bak kut teh on March 23 amid the coronavirus outbreak was sentenced on Thursday (April 23) to six weeks' jail.

Alan Tham Xiang Sheng, 34, who pleaded guilty on April 16 to an offence under the Infectious Diseases Act, was the first person to be convicted of exposing others to the risk of infection by breaching an SHN.

Tham, who runs an online sales business, arrived in Singapore from Myanmar on March 23 and was served with an SHN. As part of his notice, the Singaporean was supposed to stay home at all times from then until April 6.

Tham signed on a slip to acknowledge that he had received the SHN and to confirm that he was aware he could be prosecuted if he failed to comply with the notice.

But instead of going straight home to his Woodlands flat, he met up with his 36-year-old girlfriend at 3.40pm and the pair went to a food court at Terminal 3 of Changi Airport.

They left about two hours later and boarded a public bus for Kampung Admiralty Hawker Centre in Woodlands Drive 71 where he had bak kut teh. The court heard that he snapped pictures of the meal and posted them on social media.

After that, the couple went to a nearby FairPrice supermarket and Tham finally returned home at around 10pm.

On March 25, officers from the Immigration and Checkpoints Authority visited Tham as part of an enforcement check where he told them that he did not proceed home immediately after being served the SHN.

Deputy Public Prosecutor Kenneth Chin had earlier urged the court to sentence Tham to at least 10 to 12 weeks' jail to "reflect the seriousness of the offence" and deter others from committing a similar act.

Mr Tan had pleaded for his client to be given the maximum fine of $10,000. The lawyer said the SHN did not specify that Tham was supposed go home immediately after receiving it.

Mr Tan also stressed that Tham, who was not infected with the coronavirus, had not been "gallivanting".

For breaching an SHN, offenders can be jailed for up to six months and fined up to $10,000.