Man who allegedly took upskirt videos dies: I did not choke him to death, says guy who detained him 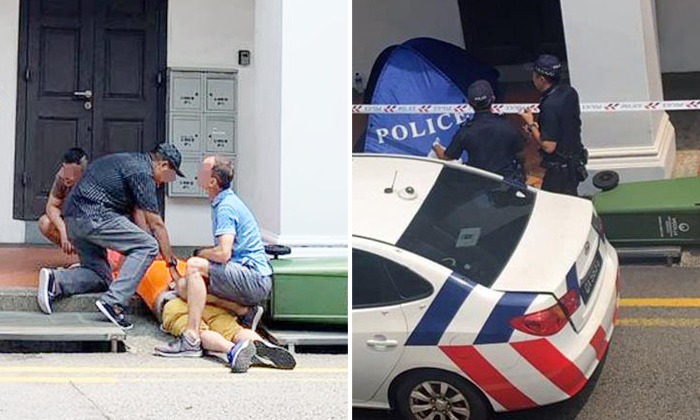 One of the five members of the public involved in subduing a 46-year-old man who allegedly took upskirt videos of a woman has said he never intended to cause his death.

In an interview with Shin Min Daily News, the man, who declined be named, said he had chased the 46-year-old for about 500m after witnessing him videoing the woman at Little India MRT station.

He then managed to pin him down along Niven Road with the help of others.

He told Shin Min he released his grip when the man started vomiting, and added that he did not choke the man to death.

Police said they were alerted to the incident at 12.45pm on Friday (Nov 1).

The 46-year-old was already motionless and had no pulse when officers arrived on the scene, police said. He was later pronounced dead by a paramedic.

In its report published on Sunday (Nov 3), Shin Min reported the man saying he was unable to sleep for two nights after the incident because of the tremendous psychological stress.

He claimed he was physically smaller compared to the 46-year-old, and that he was pushed aside during the struggle and even sprained his ankle.

"We were only carrying out our civic duty, and only wanted to wait for the police to arrive," he told Shin Min.

The evening daily reported that another man, who also helped subdue the 46-year-old man, broke down when interviewed by the police.

Ms Diana Ngiam, an associate director at Quahe Woo & Palmer LLC, told The Straits Times that in such cases, an autopsy is usually done to determine the cause of death.

If it still remains unclear, a coroner's inquiry could be held, she added.

"The Attorney-General's Chambers (AGC) will usually decide after the State Coroner has made its findings as to whether to prosecute any of the five involved- if there is evidence that the actions of any of the five are related to the man's death," Ms Ngiam said.

"In considering whether to prosecute, the AGC will have to consider the intention of the individuals. If it is deemed to be a rash or negligent act, a charge may nonetheless be preferred. However, the full facts will be carefully considered before any decision is made," she said.

Said Mr Amolat Singh of Amolat & Partners: "(The incident) serves as a lesson to everyone who wants to do a citizen's arrest, where they must be careful to not use excessive force."

It will be difficult to determine the exact role played by each individual, he added.

The case has been classified as an unnatural death and police are investigating.