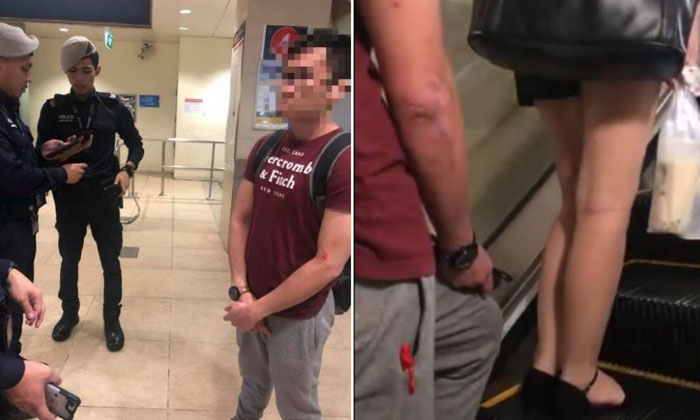 A 27-year-old man was arrested for allegedly taking an upskirt video of a woman on an escalator at Bishan MRT Station at 4.55pm on Friday (May 4).

A commuter, Mr Fitri Hakim, noticed the suspect recording the upskirt video on an escalator towards the North-South Line.

"He was holding onto his phone, along with his wallet. His wallet was covering part of his phone, but about a fifth of the phone was exposed."

Mr Fitri said he saw that an exposed red video-recording button on the part of the phone, which meant the man was probably taking a video.

In a clip by Mr Fitri which was posted on Fabrications About The PAP's Facebook page, the suspect appears to be taking an upskirt video of a woman on the escalator step in front of him.

27 yo arrested for taking upskirt video.

"I caught him then.

"I grabbed hold of his arm and I asked him: 'So did you manage to get the video?'

"He was quite shocked and said 'what video'.

"I told him to unlock his phone, and he showed me a photo of his family.

"I swiped all the way to the end and saw a video of the woman."

The police told Stomp that they were alerted to a case of insulting the modesty of a woman at Bishan MRT at about 5pm on Thursday.

A 27-year-old man was arrested in relation to the case.