Man waits 1 hour in vain after GrabFood order gets cancelled twice, left with no dinner and family outing

Stomper K had been looking forward to a pleasant dinner and movie with his family, but his Saturday evening was ruined after GrabFood cancelled his order twice.

According to K, he had ordered dinner for his family of four from Long John Silver's via GrabFood on Aug 3, at around 6.10pm.

They were also planning to go out for a movie afterwards and had already bought tickets.

K recounted: "When placing my order, the delivery time was stated as 20 minutes by bicycle. My family and I were going out soon but I thought it would be fine.

"However, upon a successful order, the delivery time jumped to 40 minutes. I wanted to cancel the order but could not do so as the restaurant was already preparing my food, according to the status.

"I checked the GrabFood app several times later but the delivery time still showed 40 minutes. I was running late for my movie but the app did not allow me to cancel.

"I sent a message to the rider to ask why there was a delay. He said he was waiting at the restaurant but the food was not ready.

"I asked if I could cancel and he said it was okay. I told him I could not cancel on my end. Within minutes, he cancelled on his end.

"However, the order simply got redirected to another rider. It was still active and I could not cancel it.

"So I just had to miss my movie. I thought at least my children would have some dinner.

"By now, the delivery time was stated as 20 minutes by bicycle again and remained so even after I checked several times.

"I sent a message to the new rider for an update and told him I had already been waiting for almost one hour. He checked and told me that there was no order at the restaurant and that somehow my order had been cancelled!" 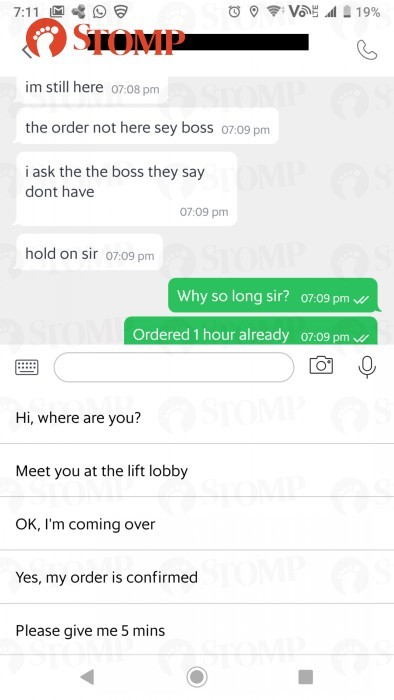 The Stomper added: "This was after waiting close to one hour. How can GrabFood simply cancel my order? Had they allowed me to cancel in the beginning, I could have still salvaged my evening."

K then wrote in to GrabFood.

In screenshots that were shared with Stomp, a Grab Support staff member can be seen explaining why K's order was cancelled twice.

K was also offered a $10 GrabFood voucher "in light of this inconvenience". 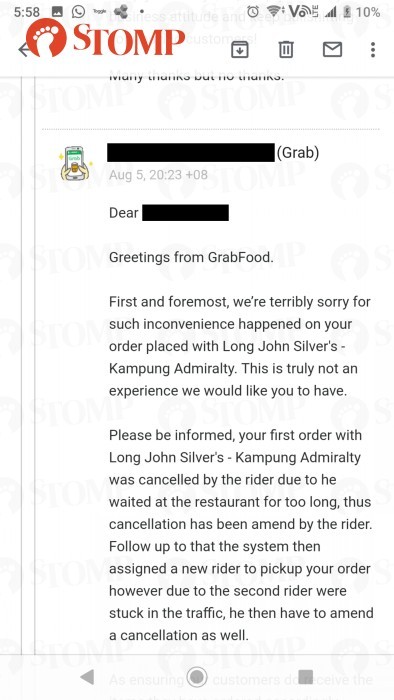 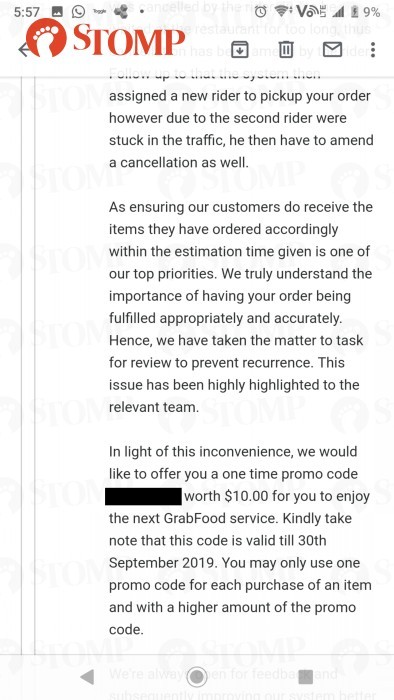 However, K feels that this does not justify his loss of time and the movie tickets that went to waste. 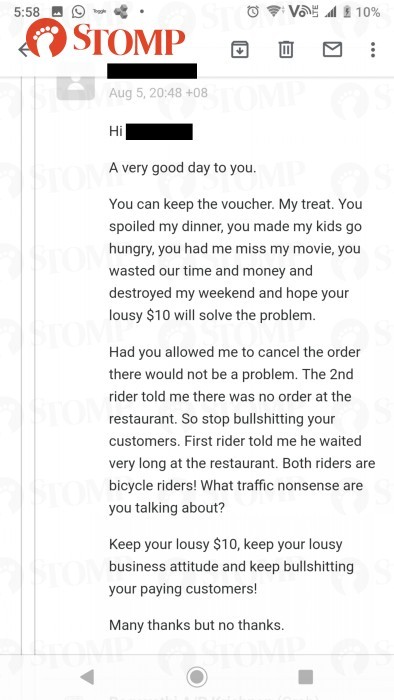 He told Stomp: "My family missed the movie (that's four weekend tickets), I wasted my time waiting and had my children go hungry.

"The best part is how GrabFood said there was traffic congestion!

Both my orders were taken by bicycle delivery riders! How could traffic congestion be a factor? I questioned them about it but have not received a proper response to date." 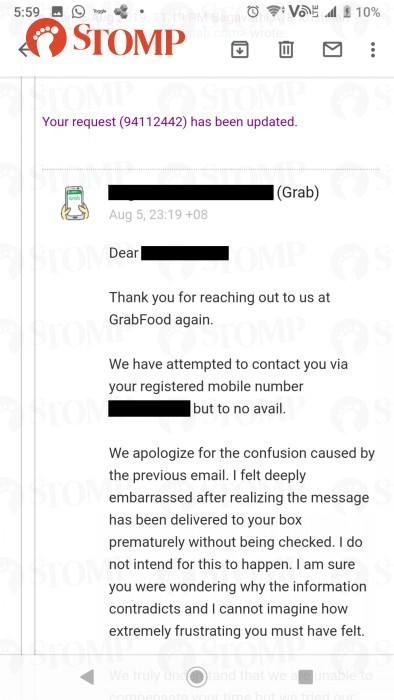 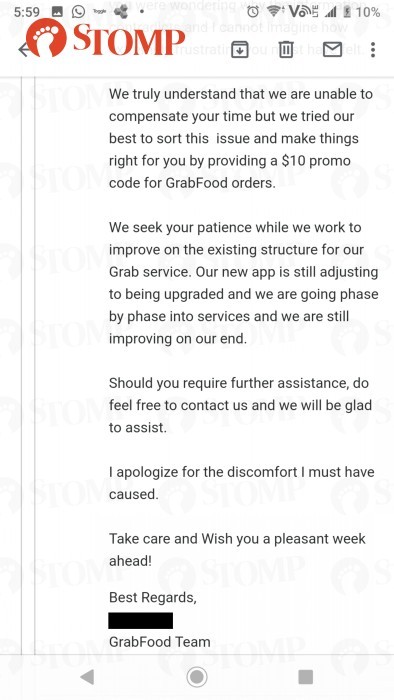 In the screenshots, the staff member can be seen acknowledging that "the information contradicts" after apologising for the "confusion" caused.

Related Stories
Foodpanda user gets Twelve Cupcakes order for Mother's Day cake cancelled at last minute
Foodpanda cancels order at the last minute, even though it has 3.5 hours to do it
Bugis restaurant 'withdraws' apology to customer who left bad review after $120 meal
More About:
grab
GrabFood
food
bad service