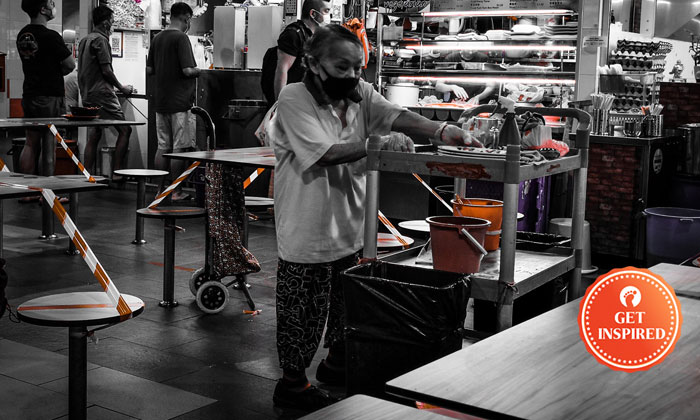 A couple was touched by the kindness of an elderly cleaner they met while they were having dinner at Geylang Bahru Food Centre.

In a heartwarming post, Facebook user Andrew Wong shared how he and his companion encountered the woman when she approached them to remove their serving tray.

He described the cleaner as in her late 70s or even 80s and that she was "short and frail".

However, they were surprised at how fast she worked for her age.

We were having dinner. Fried oyster and chilli ban mian. When she came over to remove the serving tray, we told her we...

When she passed by their table a short while later, she stopped and mumbled through her mask something that sounded like "buying a drink" in Hokkien.

Initially, Andrew thought she was asking them if they could buy her a drink.

Being all ready for it, he asked her what she would like but she clarified that she wanted to buy both him and his partner a drink instead and that she had already left some money at the drink stall for them.

"We were dumbfounded and didn't know how to reply," wrote Andrew.

"Politely we told her that is not necessary and tried to explain we don’t drink beverage while eating (quite a lie actually- depending on what drink lah)."

They then chatted further and Andrew offered to buy her food but she said she had already eaten and left to carry on with her work.

"We were all confused but at the same time pretty ashamed of what we were thinking," said Andrew.

"Something struck my mind. We were having a very spicy bowl of ban mian and I was sweating profusely.

"I ran to her and asked 'Aunty, do you mind if I ask you something. Did you want to buy me a drink because you saw me perspiring, in agony?'

"She broke into a hearty giggle and nodded her head. We looked at each other and had a good laugh, then bid farewell."

Andrew added that he promised to come back to see her again and hopefully share a drink together next time.

She told him that she works at the food centre every evening and to say hello the next time he comes by.

"We were greatly humbled this evening but our heart was warmly touched by her big-heartedness to a pair of strangers!"

Related Stories
Strangers work together to rescue turtle stranded in middle of road near Yishun Dam
Girl, 7, stocks 'Care and Share' corner with necessities for residents -- using her own savings
Passer-by hits back at critics saying touching sight of girl giving food to man is staged
More About:
inspiring
cleaner
kind
hawker centre