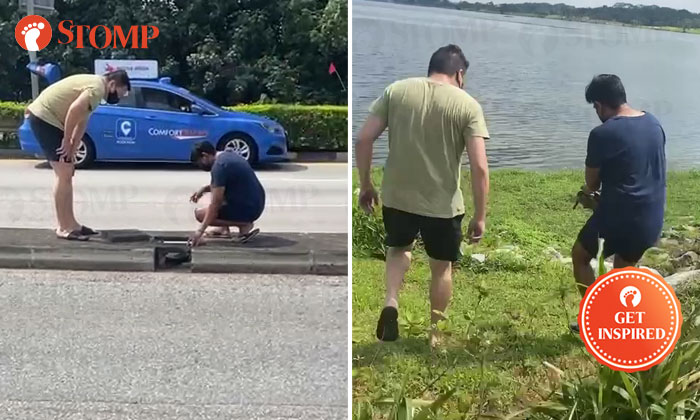 A couple of strangers worked together to rescue a stranded turtle near Yishun Dam on Sunday afternoon (June 13).

Stomper Jesie shared with Stomp a video of what happened.

"We spotted a freshwater turtle stranded in the middle of the road, probably lost its way," she said.

"We knew we had to save it before it was too late so we made a U-turn and went on a hunt and eventually spotted it seeking shelter.

"After taking a closer look, we realised we were too late and it had already gotten hit but it was still alive and strong.

"We tried to get it out but it was too hard as there were just too many cars!

"Thankfully, another kind soul spotted the turtle and made a U-turn as well!

"They lifted up the stone cover and managed to get the turtle out of the scorching hot sun and back into the water.

"Hopefully the turtle will recover."

Jesie shared that she was touched by the beautiful sight.

"Two people of different races coming together for one purpose, to save the turtle," she said.

"No discrimination, no judgement.