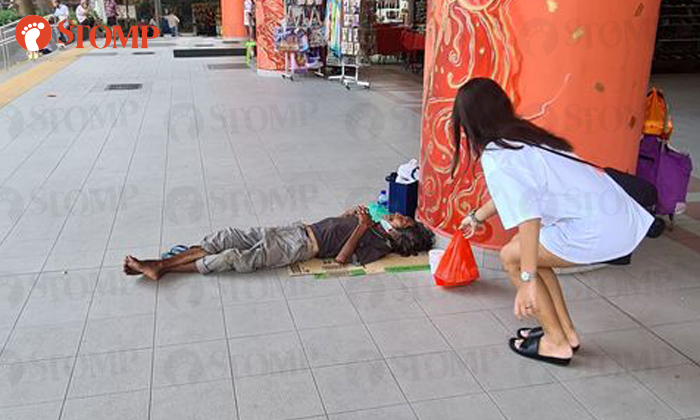 A passer-by has expressed disappointment at accusations claiming that he had staged a heartwarming scene for clout.

The anonymous Stomper had earlier shared how he saw a young woman buy food for a man at Chinatown Complex on Thursday afternoon (June 3).

He said in a Stomp report on Friday: "Even when leaving the food there, she did it quietly so as to not wake the man up."

The Stomp article went viral, with netizens praising the young woman for her kindness.

However, there were also critics who accused the incident of being staged. They asked how the Stomper could have known what the woman was doing and taken such timely photos.

Some even questioned if pork was an appropriate choice of meal for the sleeping man, as the woman had been photographed in front of a roasted meat stall.

The Stomper has now hit back at the flak and explained that the two images were taken separately in the following order: 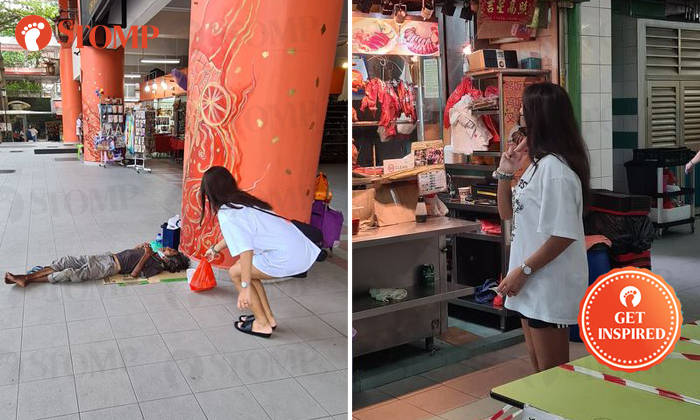 The Stomper said: "I took the picture of the young woman passing food to the man first. It was only later when I saw her at the hawker centre again where I took the other photo of her in front of the stall.

"It's sad to see so much negative feedback. I had only wanted to alert the public about the situation here, that we have elderly people sleeping in the open publicly with no one caring.

"It's sad to see that when you post something of good here, people don't see the right things.

"Even when I shared the report about 'Mickey and Minnie Mouse' at Golden Mile Complex, I don't see anyone going to check it out or taking the hygiene concerns seriously."