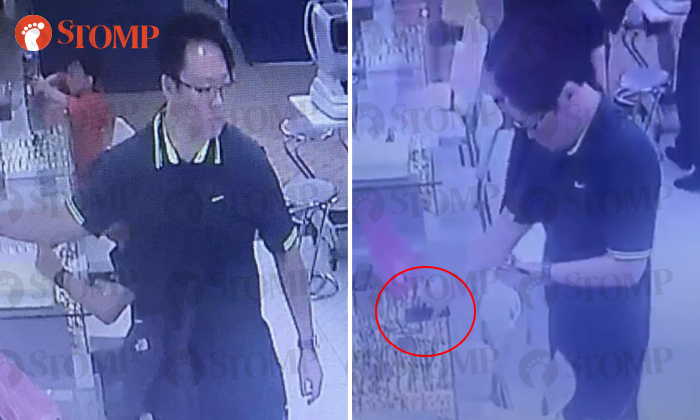 A man was seen taking a female customer's phone from the counter of a store in Johor Bahru, Malaysia, and slipping it into his pocket before leaving the place.

The incident occurred in an optical shop at Holiday Plaza shopping mall on Saturday (June 23), at around 5.45pm.

Stomper Loh, who works at the store, said that the Samsung phone belonged to a Singaporean woman.

He hopes that sharing CCTV footage of the incident will help her in lodging a report in Singapore, should she decide to.

Loh told Stomp: "From the video, you can see that he kept looking at the phone so I think he had already planned how to take it.

"He asked my colleague for spectacles to try on, and placed a red plastic bag on the glass display counter to block the victim's phone. He then put the phone in his pocket."

Loh told Stomp: "The guy who took the phone is not our regular customer.

"The victim was trying on some spectacle frames and so she didn't notice the phone missing.

"She did not make a report in Malaysia as she had came alone and hence, was quite nervous.

"I hope that by sharing this video, people can recognise the man and help her."

According to Loh, the man left the store after buying contact lens solution but left his red plastic bag behind.

In the plastic bag was a bottle of milk.

Related Stories
Man snatches phone worth over $1,000 and dashes out of store at Peninsula Shopping Centre
Couple with children caught on video taking phone at Bedok Sheng Siong supermarket
Eh, why take phone that doesn't belong to you from Marsiling shop counter?
More About:
stealing
theft
Malaysia