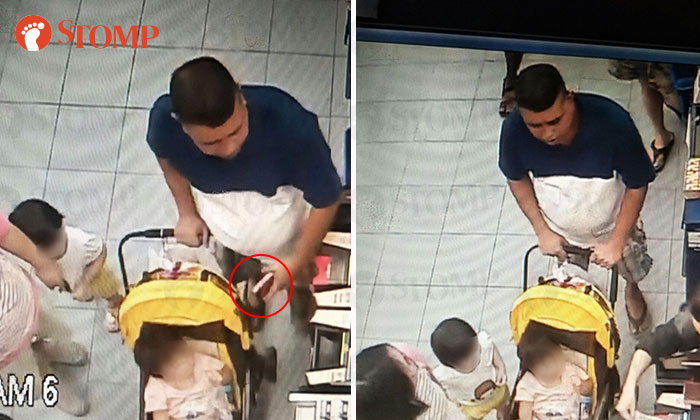 A couple was caught on video taking a customer’s phone from a Sheng Siong supermarket branch at Block 539A Bedok North on Friday evening (June 15).

Stomper Elizabeth, the owner of the phone, told Stomp that she had gone to the supermarket to do her grocery shopping at about 5.55pm on the day of the incident.

She then left the supermarket, not realising that she had left her Samsung Galaxy S7 Edge at Counter 1.

When she went home, she realised that her phone was missing and immediately told her son about it.

He called her phone but no one picked up.

When he made a second call, he found that the phone had been switched off.

Elizabeth immediately ran back to the supermarket and approached the branch manager for help.

The two then reviewed closed-circuit television (CCTV) footage and found that the phone was taken by a couple.

What was worse, the couple had two young toddlers with them.

According to Elizabeth, the footage showed that the woman and man each pushing a stroller.

The woman then reportedly noticed the phone.

She then gestured to her husband who quickly pocketed the phone.

Elizabeth then called the police and two officers reached the supermarket around 15 minutes later.

“The police took the footage of the video for investigation but left me some screenshots for my reference.

“I feel really sorry for the two young children with the couple. What kind of values are they teaching their children?

“How could they do this in front of them?”

“I really want my phone back because it contains sentimental pictures and videos of my family and grandchildren.

“Those memories cannot be replaced. I don’t wish to pursue this matter legally because I pity the two children.

"I hope anyone who knows this couple will tell them to do the right thing."